Our Camp Director, BJ Thompson, often likes to dive and explore, take boats on, and swim in our beautiful lake here whenever he can. The last month has been no exception and he’s been reflecting on his most recent experiences.

The other day I was looking out at Crystal Lake and pondering its beauty.  It was probably the smoothest body of water I had ever seen, not a ripple could be seen disturbing its surface. Its serenity caught me a little off guard, probably because a few days prior I had been out sailing on the lake when the wind and waves had been some of the strongest and most irregular I’d experienced.

A week ago we had a large cold front come through and with it tons of wind.  I had recently set up a sailboat and was excited to finally take it out in some real wind.  However, I soon discovered that there’s no such thing as a steady wind on our lake!  Ah the joys of being set in between two ridges at the top of a mountain where the wind repeatedly comes through in big gusts only to die down into nothing. 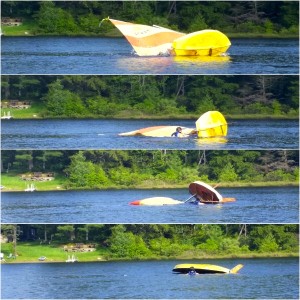 The wind was strong alright but there was no consistency in direction or strength.  My boat was regularly getting tipped over at a 45 degree angle from the inconsistent gusts of wind that would hit from every direction.  It was exhilarating to try and keep up with the unpredictable wind currents.  I was out there for about a half hour, almost tipping over multiple times, yelling at the wind in good fun when finally the wind beat me.  I had been over near the game field when a gust caught me by surprise and tipped me over, and out of the boat I went.  I’m constantly tipping myself over on purpose, or threatening to tip others over in canoes or kayaks, but It’s been a very long time since I tipped and it wasn’t intentional.  It was so exhilarating being out on the water and wrestling with the wind, it makes you feel alive, and I was loving every moment of it! 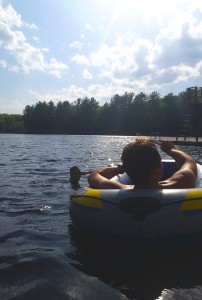 Now on a much quieter note, there was this day about a month ago when the water was so inviting and calm in contrast to that sailing experience but still just a little too cold to go swimming.  I purchased an inflatable rowboat, really more of a pool toy, but I must say it’s been one of the best impulse buys I’ve ever made.  After a long day of hard work I rowed out to the middle of the lake and just floated there for about a half hour.  It was glorious.  There was a light warm breeze, a cool bed of water underneath me and the most beautiful sky above.  All my cares drifted away.  A perfect moment of peace and serenity out on our beautiful lake.

Lakes or pools are mentioned a few different times throughout the Bible in all sorts of states, from the massive storm that Jesus calms, to fishing expeditions that suddenly become successful, or the Pool of Bethesda where it’s as still as can be until the angel comes and produces the tiniest of ripples in the water.

When I think of Crystal Lake, I think of the line Mary Baker Eddy writes in Science and Health on page 477, “The Indians caught some glimpses of the underlying reality, when they called a certain beautiful lake ‘the smile of the Great Spirit’” when talking about Man as the expression of Soul.

Every time I look out at our lake, no matter what state it happens to be in, I get this feeling. It’s kind of a combination between Love, purity, and completeness all at the same time and it never fails to revive me.

What do you feel when you look out at or think about Crystal Lake?