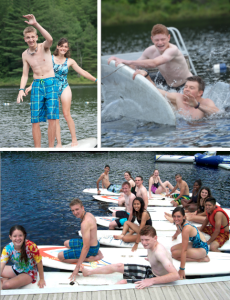 My cabin, Nikahu, woke up on the first day of classes and spent our metaphysical hour out on the back porch of the lodge reading the lesson overlooking the gorgeous fog on the lake as we rocked in our chairs and talked about God and the Mother-Father qualities She possesses.

On Sunday, I had taught my first Sunday School class with a couple of campers and we had talked about God possessing both female and male qualities, considering She is both our Mother and Father. One of the campers suggested we spend the week referring to God as ‘Her’ and see the reactions we get from other campers and staff. Even with referring to God as ‘She’ during our quiet hour, a couple of the girls expressed how cool it was to see God looking over us and cheering us on.

With the first day of classes on Monday, the rain held off and the clouds parted to show that beautiful blue sky God was gracing us with for the day. After planning our classes for a week, God had graciously prepared the staff to be excited and unconditionally joyous to see our campers filled with wonder as they ran into the longhouse for Arts & Crafts or shrieked with giggles as they swam with Duncan through the bright and sparkling Crystal Lake. 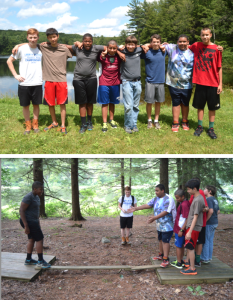 I had the pleasure of spending the first period on the dock with the LTs as they completed a series of paddle board activities that consisted of many times falling off and getting back on and copious amounts of teamwork to result in hilarious races with their partners around the swim area. They were filled with such motivation and determination as they stood among the shaky boards and prayed they wouldn’t fall yet again before catching the water polo ball.

Other morning classes enjoyed the brisk, warm weather as they completed their first archery and improv classes before lunch commenced.

The afternoon was filled with more adventures in the clear weather as Trail Blazers tackled the low ropes course where they worked on humility and teamwork to complete three or four tasks. As one of the Trail Blazer directors, I was humbled to see the progress they had made just by the end of the afternoon as we talked about our goals for the session. I was so grateful to see the goals they set for themselves such as: stronger sense of teamwork and growing metaphysically. Of course, other goals included doing lake swims and completing the entire high ropes course ending with the infamous zip line. It’s shaping up to be a very adventurous session with this group of energetic boys. 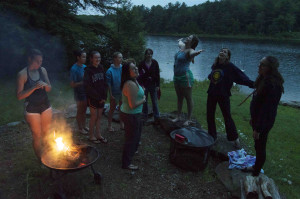 The evening finished up with an amazing picnic supper from Paul, our chef, and so many laughs among campers and staff. The game field was filled with exciting stories from the day’s events as people looked back on their first day of classes. We didn’t have desert though until later that evening when boys’ and girls’ camp had their separate evening activities. The boys ran around boys’ camp in their intense and exciting game of eight-sticks (a very serious game for boys’ camp – apparently!) as the girls took a swim and roasted marshmallows while singing loudly along to our beloved old and new Disney movie songs.

It has been such a pleasure being a camp photographer so far this summer. Being able to capture those moments when campers are most expressing God and Her qualities has been so uplifting and rewarding. With preparation for overnights, I’m excited to hear fun and crazy stories from campers for the rest of the session.