Wednesday morning, the morning campers would leave on their overnights, counselors presented an assembly on how you can change your thought – that even the smallest bit of error can be corrected.  We talked about a quote from Science and Health with Key to the Scriptures by Mary Baker Eddy: “Human thoughts have their degrees of comparison. Some thoughts are better than others. A belief in Truth is better than a belief in error, but no mortal testimony is founded on the divine rock.”(pg. 297;23). This quote along with similar ideas on changing thought were presented to the campers, so that when they were on their overnights, they would be able to know how to address any fear, and recognize the beauty of God’s temple (nature). 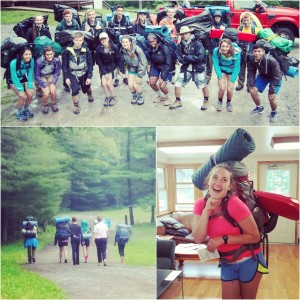 After our metaphysical, counselors gave overnight prep talks that focused on appreciating the nature around them, and “leave no trace” – a practice that helps leave the area better than we find it.

Before noon, all the campers and staff were mentally and physically ready to head out into God’s temple to explore the nature around them, learn new skills, and have a wonderful time.  During their time out in the woods, counselors and campers played games, sang songs, roasted marshmallows, and bonded with each other.

Yesterday as everyone returned from their overnights, new faces greeted them as a few new campers had arrived for the start of Session 1b (the second week of the first session.) The Trailblazers were picked up from their canoe trip, and other cabin overnight groups trickled in, happy to be back with each other.  Of course no overnight return is complete without the famous tradition of a Thanksgiving dinner – which includes all the favorites like turkey, stuffing, mashed potatoes and cranberry sauce!  Paul, our head cook, even cooked up some blueberry pie à la mode. It was a fantastic meal to share stories and laugh about all the new memories made in the last few days. 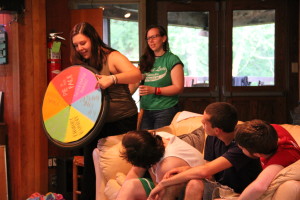 But the fun didn’t stop there. After a joint flag lowering with both boys and girls camps, everyone gathered in the Dining Hall for Overnight Debrief.  Now Overnight Debrief might sound serious, but in fact it is an evening program in the form of a game show to share the best parts of overnights. Campers are asked to come up with answers to questions like: “What was the most used phrase on your overnight?” “Who was the best cook?” “What was the funniest thing that happened?”.

The counselors from each cabin were then asked to come up and sit on a couch as they were asked the same question their campers had answered. If they didn’t get the same answer then spun the “Wheel of Destiny”. The “Destinies” include “Chubby Bunny” (sticking as many marshmallows in your mouth as possible while reciting the words “chubby bunny” 5 times), “Pie in the Face” (literally – a pie in your face), “Serenade Nabo” (sing a sweet song to our dear Executive Director, Nathan).

During the debrief, LT’s returned from their 4 day, 30 mile hike along the Loyalsock Trail! Everyone was tired, and bit wet and dirty but the laughter, smiles and comments of “It was fun and interesting” were heard amongst the group as they happily put their gear away and joined the rest of the camp.  All in all overnights were a great success!