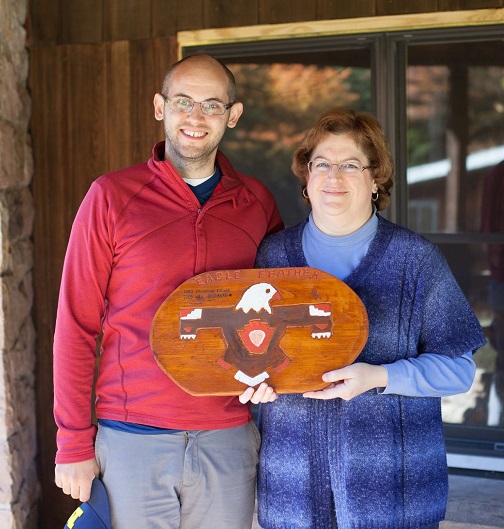 Will Buchanan and this week’s blogger Chris Elliott, the only two CLC alum to have achieved the Eagle Feather Award

A big thank-you to everyone that helped to plan and participated in Dottie’s Memorial Service, whether in attendance at Crystal Lake Camps on October 10th or with us in spirit. The service includes remembrances from Crystal Lake alumni, family, friends, and community members. As these comments attest, Dottie had amazing and varied life experiences and touched the lives of many around her. You can watch the memorial service in its entirety HERE.

The following are some of my “remembrances.” Many touch on comments made by others at Dottie’s service.

Dottie was born in Island Falls, Maine and grew up in Bangor. Dottie often spoke of her experiences as a “Rainbow Girl,” playing and refereeing for various high school sports teams, taking the train between Bangor and Island Falls (her father worked for the Bangor and Aroostook Railroad), her time at her Aunt Laura’s “camp,” and working as a “pickle girl” for many summers at the Seaside Hotel on Mount Desert Island (near Acadia National Park) beginning at age 13.

In the summer of 2013, I had the opportunity to drive with Dottie from Bellevue near Crystal Lake back to Island Falls, Maine, where she was living at that time. Although Dottie always spoke as if Island Falls were a mere hop, skip and jump from Bangor, it turned out to be over 90 miles between the two towns (which Dottie would regularly travel for church on Wednesdays and Sundays, weather-permitting). Dottie showed me around town telling stories, and we also drove down to Mt. Desert where I was able to match places and names with the many stories that I had heard over the years. She showed me where the Seaside Hotel used to stand and regaled me with stories about different people and places and high-jinks that took place during her summers there. Dottie was clearly moved to return to these places with many happy memories, and I was equally touched to share them with her.

Dottie was an avid downhill and cross-country skier, an enthusiasm she first developed growing up in Maine.  Dottie and Joe ran the Highland Ski Area in Huntersville, PA for several seasons before establishing a downhill ski area on the Crystal Lake property, installing the Poma lift from Highland Ski Area when it closed. In a letter dated Christmas 1973, Joe writes:

The enclosed platter from a Poma-lift platter-pull tow bar is to announce to you that you will very soon have your own Poma lift completely set up and in operation on your very own ski area to be named in honor of your parents ‘Mont St. Onge.’” 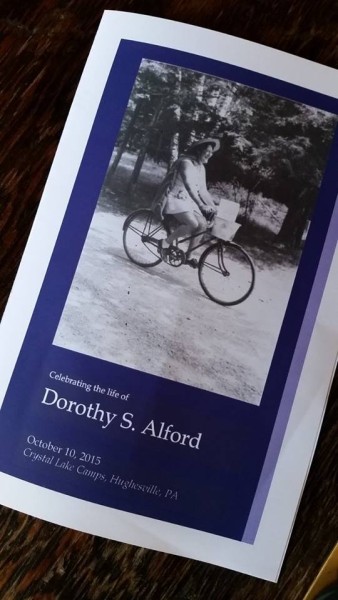 Dottie could regularly be found teaching a downhill ski lesson or in the “Coash” ski rental building at the bottom of the slope, overseeing the fitting of skis, selling snacks and hot beverages, and sharing her love of skiing.

On many occasions, Dottie expressed to me her desire to support local businesses by buying local whenever possible.   This included making purchases in Tivoli, Picture Rocks, Hughesville, Muncy, Montoursville, and Williamsport, among other places. Dottie was well-known in the local community. For many years she and Kathy had an elaborate route around town picking up milk from Schneider’s Dairy, fresh sub and pizza rolls from a bakery in South Williamsport, candy from the Williamsport Candy Co., paper products and decorations from Neece Paper, cider and apples from Wentzlers, bread from the Sunbeam bakery, and the list goes on and on. Dottie had a wide range of food service experiences, and I learned many things about cooking, meal planning, ordering, and food safety from her, as well as how to make multiple kinds of colorful jello salads (particularly popular with ‘Elderhostel groups’!).

Dottie graduated from the University of Maine, Class of 1955, with a B.A. with honors in Government. In her final semester she took courses including International Trade and Commerce Policy, Constitutional Law, and The Far East. Dottie was selected by faculty members of the History and Government department to represent the University of Maine at the sixth annual Student Conference on United States Affairs at West Point speaking on the topic “The Communist Orbit.”

Dottie studied both French and Russian and held a life-long interest in Russian history, literature, and politics. Dottie applied for graduate school but in the meantime accepted a job with the CIA in Washington D.C. It was in Washington D.C. that Dottie met Joe Alford who served in the U.S. Army and studied the Chinese language. As Dottie told the story, she and Joe crossed paths in a government lunch room and then again at the Christian Science Monitor Youth Forum. And the rest, as they say, is history…

With the support and encouragement of daughter Anna and other friends, Dottie and Joe were able to travel to Russia in 1997 to attend an International Camping Association Meeting and visiting many of the places Dottie had studied and read about for years. Dottie and Joe were also instrumental in bringing international campers to Crystal Lake Camps (including Russian campers), a tradition that continues to this day.

Again, a big thank you to everyone who shared their own memories of Dottie and for recognizing the many unique ways she touched the lives of those around her over the years.