Early each spring an extraordinary thing happens. On the first warm evening with a good steady rainfall, the amphibians come out all at once from their underground beds, where they have been hibernating. When I say all at once, I mean literally hundreds of frogs, toads, and salamanders pop out of the ground and make their way to temporary basins of water called vernal (meaning occurring in spring) pools. Basically, they are stampeding to the pools to be the first to find mates and for fertilized eggs to be laid for the next generation. 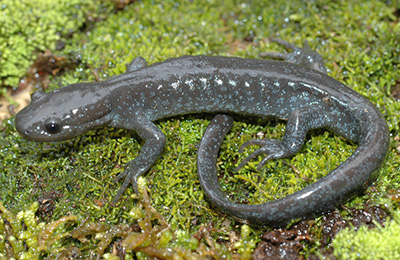 I have not seen the whole stampede, but I have witnessed the tail end (no pun intended) in a park here in western New York. One rainy, warmish evening in mid-March I went out with a friend to a county park where this mass crawl to the icy vernal pools had been seen before. We got to the little creek valley at about 8:00 at night. At first there did not seem to be any action. Then with our head lamps and flash lights we started seeing them, adult Jefferson Salamanders about five to seven inches long appearing along our path. It was not the rush of bodies we had been told about. That must of happened a day or so before. However, it was neat seeing one here and there. All told, we came across about a dozen of these salamanders. They were all headed to the same place – down the bottom of the hill to a series of vernal pools that lay along the creek bottom. 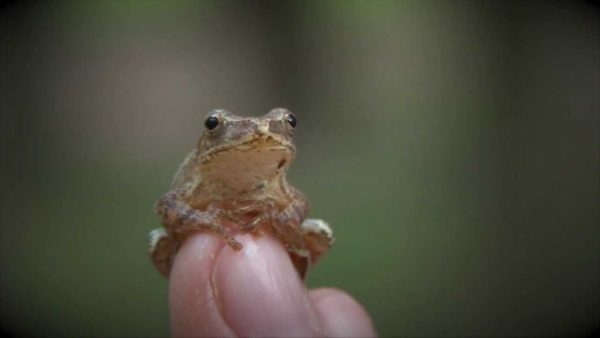 It was almost all salamanders except for – and this was so neat – one little itty bitty frog called a spring  peeper. Spring peepers are so small you almost never see them. They are about the size of the fingernail of your pinky finger. We were lucky, because one of the salamander watchers just happened to catch this speck of a frog in her headlamp light as it hopped across the path toward the pools. These little guys are the first in the spring to sing their choirs to attract mates. I am sure you have heard them in early spring going “peep – peep – peep – peep – peep” continuously through the evening stillness. 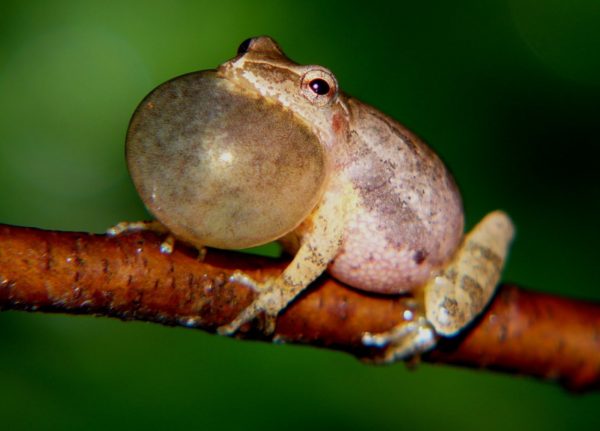 I have not been at Crystal Lake Camps early enough in the spring to witness this fascinating mass movement of amphibians to the little pools of water for the mating frenzy. I would love to do it some time. If you were to come at the right time, say in early to mid March, you might see such creatures as American toads, green frogs, leopard frogs, bull frogs, newts, red-backed, slimy, and spotted salamanders. How all these enchanting little animals know when it is the right time to come out and come together for the perpetuation of the next generation is truly another example of God’s wondrous plan and creation.

As it begins to warm up and when you are out walking in the woods, be sure to take time and stop to smell the flowers!