Oh how lovely it feels to have the campers back! After the couple days of exploring the wilderness, the CLC campers all converged back at camp at the waterfront to wash off their overnight smell and enjoy a quick dip in the cool Crystal Lake. Considering the smaller session, the entire girls’ camp all went on an overnight together as boys’ camp all set out for an overnight of their own. 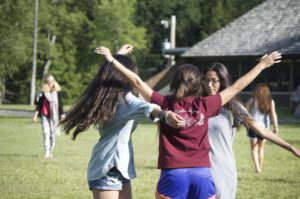 Overnights are such an amazing part of the CLC experience. The trails and destinations campers hike or boat out to are picture perfect and something you’d see out of a wilderness magazine. The hiking wasn’t always a big hurrah for my friends and me as campers, nor was the element of pooping in the woods. But seeing these amazing sites – vast mountainous landscapes, several story waterfalls, and skyscraper high trees – all made every hike worth the trip. The LTs also seemed to have a blast on their hike, ending it with a caving experience I’m sure we’ll hear more and more about as the session went on.

But another great aspect of overnights to be enjoyed back at camp, is the overnight debrief, or as it has more properly become known as, the Wheel of Destiny. 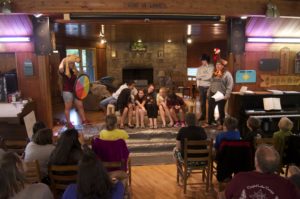 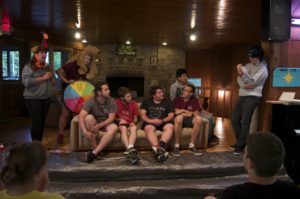 There are some pretty fun things on the Wheel of Destiny, I must admit. But as a counselor who has gotten a pie to the face three or four times too many, there is always a part of your stomach that drops to your toes when the Wheel of Destiny lands on the red space – the space filled with whipped cream and pie that will be coming out of your nose for a couple days.

And this Wheel of Destiny round was not short whatsoever of crazy moments and gasping laughs. Girls’ Camp ended up spinning quite a few – due to the extremely specific and detailed memories from the girl campers. First they were tasked with a Lip Sync Battle to Demi Lovato’s rendition of Let It Go from Frozen, then was the serenading Nabo portion where one of Adele’s top tunes made an appearance. And if that wasn’t enough for Girls’ Camp, they then proceeded to get a pie to the face – all six of them.

Boys’ Camp faired a bit better. They as well were tasked with a Lip Sync Battle to Taylor Swift’s song Mine … which none of them seemed to know. (Although we’re pretty sure they were all hiding their inner fangirl). The next round consisted of a very intense game of Chubby Bunny, which in the end, consisted of over 30 marshmallows being stuffed into five suspiciously willing faces. The best part for these boys though, was the ridiculously accurate Single Ladies’ dance from Beyonce, making us all question whether or not they had been the original background dancers in the original video.

The LTs faired much better. They knew almost all the answers to the LT’s questions. But, who wouldn’t know the other like the back of their hand after spending nearly a week in the forest hiking along together? However, the LT directors did end up spinning twice – the first time serenading Nabo, and then ending with another interesting round of Chubby Bunny. 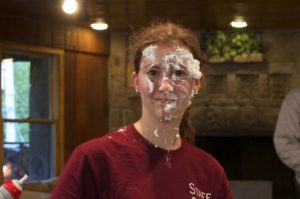 Overall, the campers got their thrills out of seeing their counselors work through these tasks. And the, “Pie in the face!” chant appeared during every spin. And though this was all fun and games, the best part was seeing the teamwork and bonding that had formed over the past couple days. Both Lenape and Canoya – Boys’ and Girls’ Camp – now have all shared these experiences together. The girls have all swam together after a long hike, and the boys all have some hilarious Mafia Game stories under their belts. And don’t even get me started with the LTs. The amount of growth and empowerment that has developed from before to now for those four campers is spectacular. They’re shaping up to be some amazing leaders, as we all knew they already were.

I love overnights. You don’t often hear campers admit that, mostly because there’s always a chance of rain, and oftentimes there’s just something a little bit off about the food. But overnights are an experience only CLC can provide as you all sit around the campfire and see if you all can really finish off an entire bag of marshmallows after a long day of hiking or boating. Everything is right in the world again, as the campers have all returned and are back to classes again tomorrow. Plus, an even more exciting thing – the 1b campers have arrived! We now have four new faces to shine their light this summer and we can’t wait to see how they will!