In true Fourth of July fashion, the day started off with the British. And by “British,” I mean that Krisie from the barn rode through the camps on her horse (little pony Peanut in tow of course) to wake the campers. Not far behind her was our one actual British attendee for the day – Jonty – with the flag of England flying high in one hand and a trumpet in the other. It was quite funny seeing the parade march down the camp road to awake the sleeping “colonists.” 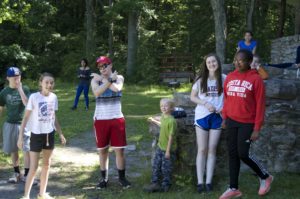 Fourth of July at camp is like stepping into another world. I remember the rush of being woken in the morning by people you thought were once your counselors but now seem to be sporting some atrocious British accents and dressed in nothing but red and no smiles. This was all moments after you heard pounding footsteps of horses and the screams of, “The British are coming!” tearing through the camp.

It wasn’t much different this year, and it surely was quite hysterical seeing the counselors run away with the flag mere seconds after assembly had closed. The annual game of Capture the Flag started up rather quickly after that with the counselors against the campers – aka the Redcoats vs. the Colonists – and suddenly it was life or death to get to those flags – aka bandanas – to save America. 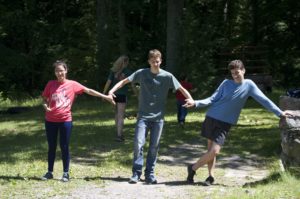 The great thing about the Fourth of July is that it’s an all camp game. Everyone is participating in some way, and all the campers are interacting no matter their cabin, classes, or clan. All the campers band together to defeat the British, and it’s amazing the things they come up with. We had the LTs in charge of the campers, and they helped to strategize which camper went where and what the roles were in order to ensure their success. Campers were jail enforces keeping track of who was in jail and for how long, runners who attempted to find where the flag was hidden, defense who protected their own flag at all costs, and then there were the offense who put their jail time on the line in order to snag the flag. 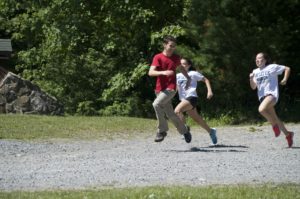 Capture the Flag took the whole morning, and by lunch and rest hour the campers were already rearing to go for their next activity. One of our counselors modified a game she remembered from her time as a camper newly renamed Colonists vs. Redcoats. It was a message carrier game having the campers run around the lake holding precious notes to get to the next station to further their chances at a victory. It was pretty funny in the end, and the campers played in clans to help each other pass notes from one station to the other. The stations inevitably decided to hide in the woods for the campers to find upon their arrival, and it took me at least ten minutes to find Nabo in a secluded patch of woods right off from the teepees. 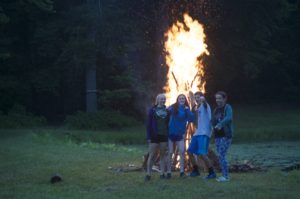 The rain then started drizzling a bit, and so the indoor games quickly followed. There was a rambunctious game of Captain on Deck. Campers port, port, ported themselves to victory as the dining hall was filled with screams and giggles of victory and defeat. The rain then held off long enough for the bonfire, sparklers, and at long last – the fireworks. The sky was a pretty blue against the bright bursts of colors and everyone’s faces were illumined with the soft orange of the bonfire. Everyone huddled together in their makeshift rain gear and celebrated the end to a great day.

In all, the day was an adventure, a great one at that. We’re back to full days of classes now, and the energy is in full swing! Talent Show is coming soon, and hopefully the new friendships formed during the 4th festivities will sprout some great skits and acts!