Last night was one of the wildest nights at CLC I’ve ever seen in the nine years I’ve been here. Truly, it was a theatrical masterpiece to go down in history. The Session 1 Talent Show blew us away. It’s no secret that CLC holds some of the greatest talent of all time, and when Merlin the Time Wizard (aka Counselor Seth) stepped out on the stage to find history’s best talent … along with his fluffy little dog … we all knew it was going to be a great night. He enlisted the help of Alexander the Great, Billy the Kid, and the Greatest Disco Dancer in the World before wiggling through history and time to end up at Session 1 CLC 2016. 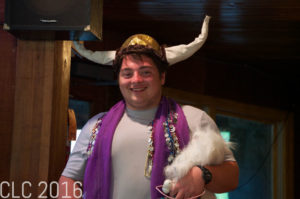 I’m not really sure where to start with this one. All the acts were so crazy amazing, that it only seems fitting to break them all down. We started strong with Writing Class coming out and reenacting one of their stories they’d pieced together. It was quite imaginative, and in the end there was a surprise twist of a dragon coming out of nowhere. It was fabulous and had us all laughing from beginning to end. Then came the cup pouring act of Jocelyn and Maddy who, with serious craft and dedication, poured water into quite a few cups without spilling once.

Then things got weird.

It was time for the LTs to perform, and we were all holding our breath. The LTs have always come out on top when it comes to funny skits and dances for the Talent Show. My class did a choreographed dance to Call Me Maybe back when the song was brand new, and even got all the boys into dresses as we attempted to wear their baggy sweatpants. The year after that, the infamous skit “Tommy Pear Pit” hit the stage and there were even some dancing trolls at that point. This year was no different, as the LTs all walked out as multiple different fruits. There was Caitlyn the Blueberry who then fell into an alternate dimension and became Caitlyn the “Straight Up Street” Eggplant, who then happened to meet Bruce the … I believe a Squash? So then Caitlyn the Eggplant and Bruce the Squash obviously fell in love – as Eggplants and Squash tend to do – but their love was not in the stars apparently as Stepmother Pumpkin Olga was not having it. Olga demanded Bruce marry Brittany the Broccoli who was just looking to find the nearest Starbucks. 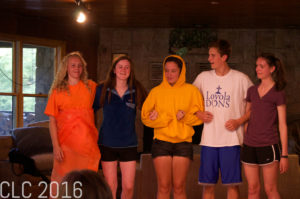 The skit ended much like the Broadway shows we all hope to one day as Caitlyn the Eggplant (even though she had been banned from the property) showed up at Bruce and Brittany’s wedding and declared, “Plot twist!” before pushing Brittany off a cliff – where she ended up finding a Starbucks – and then struggling with Olga until Olga rolled away into the backyard of a little girl named Darla who was in need of a pumpkin for her Halloween party. Caitlyn the Eggplant and Bruce the Squash ended up living happily ever after and the LTs could barely keep themselves together to bow in the end.

It was Oscar worthy.

After the LTs got all their fruit costumes from the stage, there was a short musical number from some of the girls’ counselors, only to be followed by what can only be described as screaming/singing/rapping as some of the boys’ counselors took to the stage to share with us their spot on lyrics of Ice Ice Baby through sunglasses and awkward dance moves. Fritz the drummer then made another appearance as he rocked out, only to be followed by yet another odd thing only CLC Talent Shows can provide you – and it involved hummus, peanut butter, a carrot, raspberry yogurt, and I’m pretty sure there was some sour cream in there as well.

You see, Seth was the host of the show, and so between acts as people were getting ready, Dunwoody Counselor Joseph would pretend his arms were Seth’s own and then force all these odd combinations of food into Seth’s mouth. It was wildly popular, and had us asking for more once the skit was over. But Joseph and Seth weren’t done yet. In fact, they recreated the entire Daniel & the Lion’s Den story immediately following. Joseph played Daniel and Seth played … everyone else. 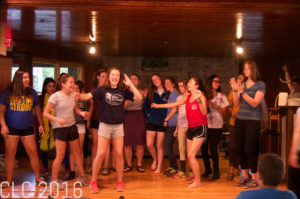 After that was a lovely piano performance, followed by Canoya giving us the Taylor Swift Dance Party of our dreams. It ended with a big group hug making all our hearts melt just in time for “Paul McCartney” and “Stevie Wonder” to take the stage to sing together in perfect harmony as we all swayed to the music.

And then, not to be outdone by Canoya, Lenape charged the stage to sing, “The greatest American anthem of this generation,” or, as we all know it by – Katy Perry’s Firework. Apparently, and my fact checking might be a little off here, but the song Firework is actually the anthem of the 5th of July, which we apparently take very seriously here at CLC. Regardless, it was a great end to the night.

Or so we thought.

That is, until Seth and Joseph sat back down on the stage with an apple pie and whipped cream which, after a couple of attempted bites, was just gently pushed with force into Seth’s face as a finale. But that was all after Fritz went up to “offer Seth a spoon” only to eat a piece of the pie himself and then run off.

All in all, the Talent Show is one of the wildest nights at camp. Everyone walked away – after a rocking post Talent Show dance party of course – saying that this Talent Show was one of the best we’ve seen in a while. It’s great to see all the campers and staff doing crazy and wild things that they can’t do anywhere else. The Talent Show is kind of a sacred place to go up and do as you please while the audience supports you 400%. We have another day of classes today, and I’m sure the Talent Show will be the talk of the classes as they go about their activities.

Banquet is coming up, and the props are already being prepared in the Longhouse. It’s crazy to think that the session is coming to an end. Just yesterday if felt as though we were all sitting at activity fair picking our classes, and now it’s the last full class day of the session. It’s been a great one so far, and we’re all looking forward to the next couple of days.