What a wonderful thing Love is. And around Valentine’s Day, it’s easier to remember love and acknowledge it amongst our friends, family, and significant others. It’s the time of hearts, flowers, chocolate, and sappy love songs. But most importantly, it is just another daily reminder to love, love, love.

I could quote some of my favorite Love quotes from Science & Health, but I’m sure we’ve all heard them and love them all just the same. So instead, I’m going to talk about Albert Einstein.

Now, we all know who Albert Einstein was. He was one of the smartest people in our entire world! He knew so much and explored so many new mathematical equations and scientific discoveries! And he also was a huge fan of Love.

Albert Einstein was not a Christian Scientist, but he was very familiar with our religion. In fact, it was early in the 1950’s when Mr. Einstein attended a noonday meeting at Fifth Church of Christ, Scientist, New York City. It was at this meeting that he met George Nay, who was at that time a member of The Christian Science Board of Lectureship. Here, Einstein is quoted in saying to Nay, “Do you people realize what a wonderful thing you have?”

How cool is that? Why yes, Mr. Einstein, we sure do have a wonderful thing. Thank you!

But back to the focus on Albert Einstein and Love. There is a letter Einstein wrote to his daughter Lieserl and it talks about “The Universal Force.” Considering this is Albert Einstein, you would think or guess that it could be some fancy equation that would takes ages to crack, but instead, Einstein’s response is simple: Love.

It’s a wonderful letter, and it just goes to show that love is really so powerful, so potent, that it can’t all be compressed into one day such as Valentine’s Day. In fact, we should be loving all the time, constantly, with nothing holding us back. Love is so special, so personal, and so universal that there is nothing more meaningful than to love someone unconditionally.

And loving someone doesn’t have to be only in a relationship. You can love your classmates when you help them with papers, love your professors when you get good grades to show them you’ve been listening in class. We love our family by making our beds in the morning, thanking them when they pick us up from places, and calling home whenever something reminds us of them. We love our friends when we laugh at their jokes, or suggest a movie night during a stressful time. We love our pets when we take them on walks or give them treats, or even create a lavish Instagram account so you have an excuse to take lots of pictures of them. (Guilty!)

But no one says it better than Albert Einstein when he remarks that, “The universal force is LOVE.”

I’ve included his letter to Lieserl below, and I do think it is such a lovely reminder of the power of love, and the power we possess to make a difference just by loving.

So Happy Valentine’s Day everyone! I love you. 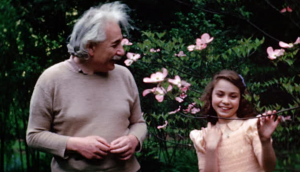 A letter from Albert Einstein to his daughter, Lieserl:

“When I proposed the theory of relativity, very few understood me, and what I will reveal now to transmit to mankind will also collide with the misunderstanding and prejudice in the world.

I ask you to guard the letters as long as necessary, years, decades, until society is advanced enough to accept what I will explain below.

There is an extremely powerful force that, so far, science has not found a formal explanation to. It is a force that includes and governs all others, and is even behind any phenomenon operating in the universe and has not yet been identified by us.

This universal force is LOVE.

When scientists looked for a unified theory of the universe they forgot the most powerful unseen force.

Love is Light, that enlightens those who give and receive it.

Love is gravity, because it makes some people feel attracted to others.

Love is power, because it multiplies the best we have, and allows humanity not to be extinguished in their blind selfishness.

For love we live and die.

Love is God and God is Love.

This force explains everything and gives meaning to life. This is the variable that we have ignored for too long, maybe because we are afraid of love because it is the only energy in the universe that man has not learned to drive at will.

To give visibility to love, I made a simple substitution in my most famous equation.

If instead of E = mc2, we accept that the energy to heal the world can be obtained through love multiplied by the speed of light squared, we arrive at the conclusion that love is the most powerful force there is, because it has no limits.

After the failure of humanity in the use and control of the other forces of the universe that have turned against us, it is urgent that we nourish ourselves with another kind of energy…

If we want our species to survive, if we are to find meaning in life, if we want to save the world and every sentient being that inhabits it, love is the one and only answer.

Perhaps we are not yet ready to make a bomb of love, a device powerful enough to entirely destroy the hate, selfishness and greed that devastate the planet.

However, each individual carries within them a small but powerful generator of love whose energy is waiting to be released.

When we learn to give and receive this universal energy, dear Lieserl, we will have affirmed that love conquers all, is able to transcend everything and anything, because love is the quintessence of life.

I deeply regret not having been able to express what is in my heart, which has quietly beaten for you all my life. Maybe it’s too late to apologize, but as time is relative, I need to tell you that I love you and thanks to you I have reached the ultimate answer!