One of the things I love about Christian Science is the inclusion of the term “Mother” with reference to God. In Science and Health, with Key to the Scriptures, (p. 332) Mrs. Eddy writes: “Father-Mother is the name for Deity, which indicates His tender relationship to His spiritual creation.” This helps so much in developing our understanding of God’s completeness; and of our own completeness as His reflection. Every good, perfect idea represented by the terms father and mother are ours to express, as Mrs. Eddy says on p. 516 of Science and Health, “Man and woman as coexistent and eternal with God forever reflect, in glorified quality, the infinite Father-Mother God.” 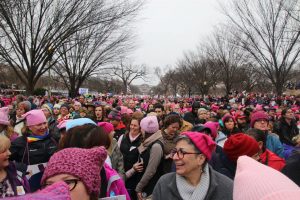 Recently I had a wonderful opportunity to experience that pure expression of the motherhood of God, reflected in man, when I attended the Women’s March in Washington in January. Now I don’t mean to get political — in fact there was a broad spectrum of political opinion expressed that day, not all of which I shared. This sense of motherhood didn’t come from a political opinion, but from a spirit of warmth, inclusiveness and helpfulness so evident among the marchers that day. It felt as though, whatever the politics, the real impetus behind this event was a very motherly desire to gather up in our arms all those who felt left out or threatened and offer them whatever comfort or protection we could. And it was an opportunity to resist the demeaning of women, or of any other group.

And in spite of what may have appeared from certain signs and speeches, there was very little anger. People were joyful, kind, and buoyant with hope. As I later learned, although there were literally millions of men and women marchers, all over the world, there was not a single arrest or violent incident of any kind. Later that day, as we rested in a local cafe, we witnessed perfect strangers helping each other, offering a chair or a cup of coffee. As my niece said as she watched this unfold, “Aren’t women great?” 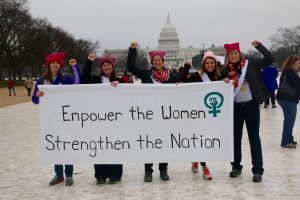 palpable presence of Love. It was the highest ideal of woman being brought out. “The ideal woman corresponds to Life and to Love. In divine Science, we have not as much authority for considering God masculine, as we have for considering Him feminine, for Love imparts the clearest idea of Deity.” (Science and Health, p. 517)

The inspiration of love, peace, and empowerment was felt by all, but I am so grateful to Christian Science for giving me the tools and the understanding to look deeper into the principle behind this activity and see the hand of God. It enables me to see that true “Women’s Empowerment” is not at all about giving one gender the upper hand, but about bringing out the true sense of the motherhood of God, reflected in us all, both men and women. It is what enable us to see just how powerful a peaceful and inclusive sense of Love can be, and to want that to be part of our experience and our identity. Through Christian Science, I have come to understand that the masculine and feminine are not separate or contrary in any way, but that they are complementary aspects of the same idea. Strength is expressed through Love, peace through activity, justice through mercy. 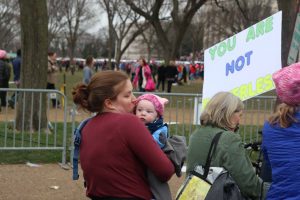 “‘The time of times’ is near when ‘the new woman’ shall subdue the whole earth with the weapons of peace. Then shall wrong be robbed of her bitterness and ingratitude of her sting, revenge shall clasp hands with pity, and love shall dwell in the tents of hate; while side by side, equal partners in all that is worth living for, shall stand the new man with the new woman.” (Pulpit and Press, p. 84) I believe we just got a taste of this in 2017!