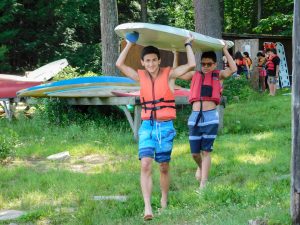 Field. We’re offering quite a few classes this session with swim lessons and arts and crafts every period, both junior and senior archery, basketball, tennis, soccer, nature exploration, Spanish/English lessons, boating, horseback riding, photography, S.T.A.R. (Sports That Are Rad), Imagination, Cooking, Sparrow Pebble (a branch of Eagle Rock), R.A.F.T. (Random Awesome Fun Things), and a class called Cool Stuff with Liam & Joseph – taught by none other than Liam and Joseph.

Overall, every part of camp is active for the majority of the day and so the entire camp is loud and active all day long. Yesterday I walked from the Waterfront to the Longhouse to the basketball courts then stables and all the way back, and each place I visited there were smiling faces and screams to excitement and adventure. For second period, I helped teach a photography class where the objective was for the campers in the class to get as many pictures of people smiling as they could. We started down at the waterfront and would go on through camp from there, but at one point one of the Kiya girls in the class was running around screaming, “There’s too many! I can’t take pictures of this many people smiling!” 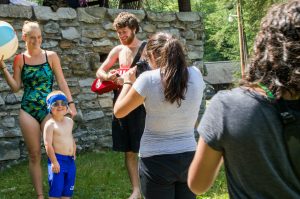 Needless to say, everyone seems to be having a great time.

Cabin pictures were also taken yesterday, and those are all uploaded to the SmugMug for all to see. We’ve recently been recreating some old CLC pictures we’ve found around the office, and one of them was from 2002 an Ogdonia cabin picture. Ogdonia isn’t a cabin we’re using this semester, and so I took the picture to Norman, who had the same number of campers as in the picture, and asked if they’d be interesting in recreating it. Instantly they were all stoked to help and started divvying out who should go where and what people’s arms/faces/hands should be doing. I’d say we did a pretty good job of recreating the photo, but the coolest part of the whole project is for the campers to see that really nothing has changed in all the years CLC has been around – campers are still smiling and enjoying the brotherhood/sisterhood that camp has provided for them. 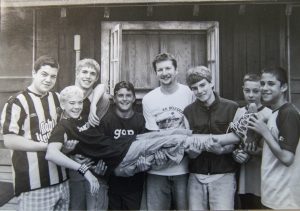 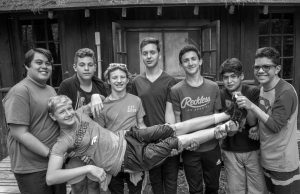 In the evening we all packed into the logs around the teepees for Council Fire. The CITs were the fire dancers this session for their first time and they did a great job of telling a story that captivated the audience. We had one person tumbling, a couple of cool stunts, and a fire that burned late into the evening even after Council Fire was finished. We started out with a song of My Paddle Keen and Bright before going into Indian Leg Wrestling amongst the campers. Though we weren’t the best of leg wrestlers, we still had fun and the amount of cheering our clans are doing, this session especially, is quite epic. I’ve never seen such crazy cheering. 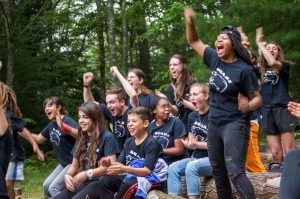 Not to mention the clan cheers were pretty epic too. Even the Bears, who are classically known recently for their slightly less than a yell type of cheers, rewrote an entire chorus from a popular song on the radio right now. The Turtles did their best to do an authentic New Zealand haka cheer which, instead of instilling fear in the other clans, may have just made them laugh instead (Turtles included).

But the greatest part of it all is that everyone is thoroughly invested. Even the shyest of campers come out to cheer and scream for their clans at Council Fire, and that’s why Council Fire (in my opinion at least) is one of the best activities we do at camp. The stories told help teach lessons, and the games help create some healthy competition and great stories for days to come. Without even mention it, most competitors in Indian Leg Wrestling were hugging either before, after, or at one point two Nikahu girls hugged in the midst of wrestling when they were reduced to tears from laughter at their failed attempts.

Though it’s started out as a bit of a rainy day, we’re still excited for what today’s classes will bring. Some of my fondest memories as a camper are from rainy days when we’ve been rained out of the Waterfront and have gone into the Lodge to play card games. It’s the spontaneous events that are most memorable because they are so unlike the rest.

Our evening activity tonight is Vespers, so campers are already starting to look through different hymns – both old and brand new – for some hymns to sing with their cabins/classes/clans. I’ve heard some whisperings of epic Bible stories to be told, and I know a couple campers brought some lovely instruments to play, as well as many campers and staff using their lovely singing voices.

It’s going to be a great day! Pictures from Council Fire are currently being uploaded to the SmugMug, and you can check our Facebook, Instagram, and Twitter for daily updates on the adventures and spontaneous moments of camp! Have a blessed day everyone!