Yesterday threw us a little curve ball with the weather. We were expecting thunderstorms all day, but instead God granted 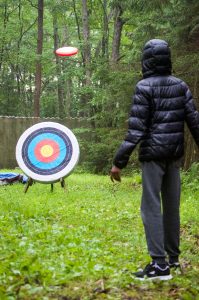 us with random light drizzles throughout the day which had the junior archery class in the morning throwing frisbees at targets instead of shooting arrows and nature class wrapped tightly in their rain jackets just in case.

But classes charged on with vigor as campers made their way to their morning and afternoon classes with smiles on their faces and new slime made in Arts & Crafts that was a huge success. Even some of the counselors were found playing with it as the campers shared the blue goo on the Game Field before dinner. 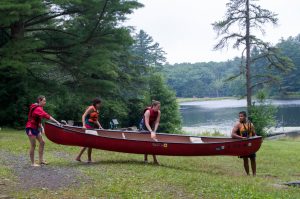 The LTs went out on the lake during the morning in preparation for their canoe trip which they just left for. They practiced all the canoeing techniques we’ve all come to know and love – J-stroke, using the paddle as an extension of your arm, all that jazz – and worked on what to do if your canoe tips (which was unexpected for the LTs but hilarious for all of us). They they portaged their canoes around the lake to get a taste of what their future couple of days is going to hold. Out of the three of them, only one has portaged canoes before, so this is going to be a fun new experience for this group that they will have the opportunity to grow.

Fifth period was quite the lively time yesterday as 21 of our campers signed up for a game of 8 – Sticks out on the soccer field. Usually, 8 – Sticks is played with Boys’ Camp on the separate camp activity nights. But this 8 – Sticks had campers from every cabin eager to grab those sticks and make a dash for it.

If you don’t know the game of 8 – Sticks, I would be ever so happy to break it down for you. Basically, it’s kind of like a 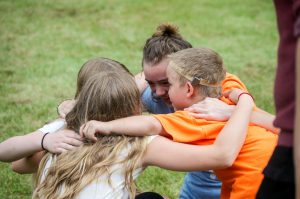 condensed game of Capture-the-Flag. Each team has 8 sticks (ahh, making sense now?) and the objective of the other team is to retrieve all 16 sticks. The sticks are kept in a small area, usually a hoola hoop, and the soccer field is split up into two sections with the sticks in each soccer goal. Campers try to make a break for it and run to the other side without being tagged. If you get to the other side and step into the hoop where the sticks are kept, then you can have a nice little jog back to your side with the stick you’ve retrieved proudly in your hand. 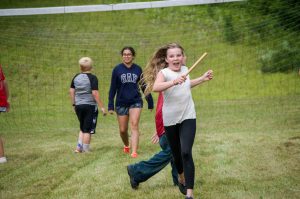 I must say, the girls dominated this game. We don’t play this game often, so maybe it was the fact that we were playing with fresh eyes and strategies, but one of our campers at one point, Joli, ended up getting up to six sticks for her team. Older and younger campers alike where helping one another, using diversions, and teaming up to retrieve the sticks for their teams. At one point, a Norman boy put a Dunwoodian on his back and start sprinting. The Norman boy got out, but he was able to drop off the Dunwoodian in the chaos and the little guy was able to grab a stick for their team.

These are the most pure camp moments. Seeing the teams work together, the campers chase one another in laughter, and the light and fun camaraderie brings out the best in our campers and staff and help to solidify the bond of family we all work to possess. At times campers had to give themselves time outs to catch their breath, not from running, but from laughing because someone else had done something so funny in an attempt to get a stick or dodge being tagged, that there was either an epic fail or a ridiculous win that had us all almost on the ground in laughter. Overall, it was a hilariously great experience.

After dinner and some delicious cheesecake (that’s right, I said cheesecake) we had a joint flag ceremony before filing 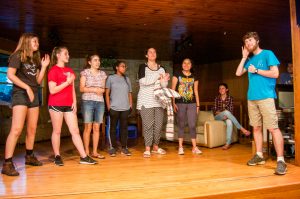 back into Alford Hall for Vespers. We had quite a few fun acts this session with hymns from both the Christian Science Hymnal and the new supplement that the cabins performed for us. Jenny, our camp mom and fabulous singer, sang You Raise Me Up and I swear that the entire camp has never been so quiet as when she was singing and fully captivated by her voice. It was lovely and definitely cherished by all as she sang. Hopefully she’ll be willing to perform for the Talent Show as well. We’re so blessed to have her here this session.

After that the LTs put on a skit for the story of Noah which involved some banging of pots and pans, throwing cups of water, and a hippo – not a real hippo though. Could you imagine trying to get a hippo up on to the stage? Yikes. The second skit of the night was put on by Nikahu, who told the story of Joseph and the Technicolor Dream Coat with our very own Counselor Joseph playing Joseph. It was quite a whirlwind with all the characters coming out in a rush and a funny narration to go along with it. Overall, the whole camp should now be able to tell the story of Noah and Joseph either with a smile on their face, or without the ability to finish the story due to laughter.

The CITs had a night to reflect last night where they went up to the ski slopes and roasted marshmallows and talked about what they’ve learned so far and set goals for the rest of the summer. Logan and Arturo, the CIT Directors, told the CITs that they were going to be doing a service project up at the top of the slopes and the CITs, loving and gullible as they are, totally believed them and were absolutely willing to clean up the ski slopes in the dark. That is, until they pulled out the s’mores supplies and they showed a bit of relief considering none of them had brought flashlights.

The CITs are doing a wonderful job so far this summer. Yes, it’s only been four days or so, but you can tell that this group of both long time and fresh faced to CLC campers are determined to do a good job and genuinely want to give their campers the absolute best experience they possibly can and support them however they can. We’re lucky to have them!

It’s another full day of classes today, and then for fifth period the campers and staff will be prepping for overnights since they leave tomorrow! Campers will be hiking out Thursday morning to their respective campsites and spend a couple days out in the woods enjoying nature! We’re excited for the experiences camper and staff will be able to have and bonds they will form while out hiking and can’t wait to hear the stories that come from it! Overnight Debriefs are usually one of the funniest nights at camp, hands down. Tonight is our Testimony Meeting, and campers are already thinking about any healings or instances of God’s protection and direction that they can share with the camp. We’re off to a great start! Have a great day everyone!