It’s been a crazy couple of days since the return from Overnights. Everyone came back with smiles on their faces and exciting stories to tell about the trails they trekked, the canoes they paddled, and the campsites they stayed at. For many of our first year campers, this was their first overnight and they all came back saying it was something they’d definitely be looking forward to again next summer.

Yesterday was World Cup Soccer Day, which is a big day for everyone, but the night prior to that was our Session 2 Talent 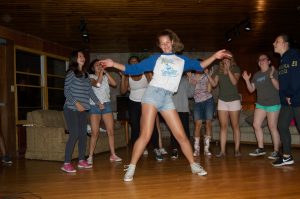 Show and boy, was that something. If there’s one thing this session that is so wildly apparent to everyone, is that all the campers have bonded together as a strong support system for those who are going out of their comfort zone on a daily basis. This Talent Show was packed with multiple different kinds of acts from all the cabins, and with each performance – well-planned or spontaneous – the audience was roaring with applause.

I’ve never been in a louder Alford Hall situation, and I’ve been through ten years of Talent Shows and stay-over sleepovers. Campers were screaming in encouragement for one another during every performance. Not only were they screaming and cheering, but most of them were out of their seats. I couldn’t help but wonder if maybe we didn’t even need the chairs because the campers were jumping around to music and cheering constantly. 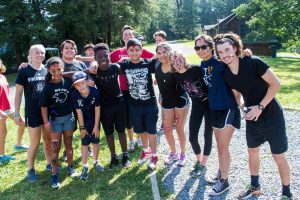 You could see this during World Cup Soccer Day as well. A younger camper that wasn’t playing at the time, went over to the water station and was filling up cups for both teams, making sure that everyone had water when they got off the field and running around shoving cups into camper’s hands to make sure. Even when scored on, I saw campers clapping for the other team and there were quite a lot of high fives, hugs, and fist-bumps going on.

World Cup Soccer Day was quite a hot one, but everyone seemed to look out for one another as they cheered from the shade, or ran along the sidelines with their team as someone made their way towards a goal. Though we had the disputes here and there about balls going out of bounds or fouls, they were never heated, and merely a question that was given a 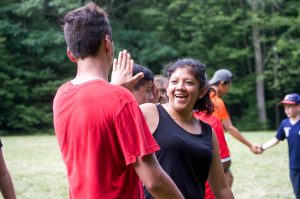 quick answer before the games continued harmoniously. No matter where you were around camp, you could hear the yelling and cheering from the campers and staff, or horns blasting in congratulatory honking in the distance.

Treats were brought in throughout the day from a snow cone machine during the semis, and then a popcorn machine that was handed out as the campers walked back to their cabins. It’s always fun to have these whole camp events after Overnights, because Overnights bond campers and staff together immensely, and so these whole camp events allow for the entire camp to bond together right as the last final days of the session come to a close. 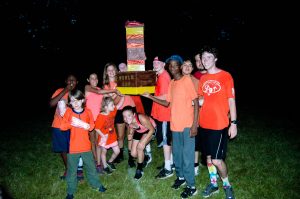 Today is a full day of classes, followed by the Separate Testimony Meetings later in the afternoon. Oftentimes, these meetings allow for campers and staff to give gratitude for the session, or tell of any hearings they’ve had while here this session at camp. It’s a great time for reflection and preparation for how campers can metaphysically prepare for the upcoming year! Can you believe the session is almost over? More fun days ahead!