Last weekend I found myself in St. Louis attending the annual music festival – Loufest. This was my third time going in the four years I’ve been at school near St. Louis, and I must say that for my senior year Loufest was good to me. 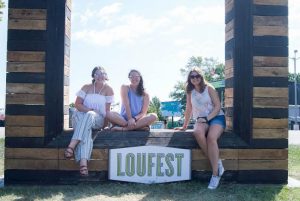 Music has always been a pretty big part of my life. When I was only two, my mom took me to a high school production of Joseph and the Technicolor Dreamcoat, to which I sang the lyrics and wore out our cassette tape for the next five or so months. When I got an iPod Classic for Christmas in the 6th grade, I personally considered myself to be the coolest person in my grade. And recently you can find me word for word singing along and rapping to Hamilton in my spare time. 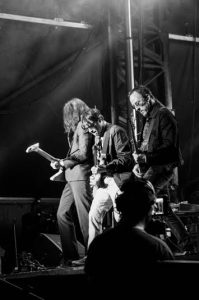 Finding new bands is always an exhilarating journey, and so Loufest has always provided me with a new plethora of obsessions to fall in love with. The first day of our two day festival going experience was a doozy, as we saw maybe five bands and singers throughout the day. We camped out for an hour to be front row for Spoon, and I will take it to my grave that the front man looked directly at my friends and I.

The second day was the day we camped out for five hours to see Weezer front row, and I have zero regrets. Weezer has a very special 90’s hot summer day, singing in the minivan with the windows down passing cornfields in Ohio kind of vibe that holds a special spot in apparently a lot of people’s hearts considering how many others had the similar idea to camp out.

But this ended up being the best experience of the entire day (minus the whole Weezer performing thing). My friends and I talked with people from all across the state and country – all college kids interested in different things and leading different lifestyles – but all super pumped about Weezer. It didn’t matter where these people were from, or who they were because when Weezer starts playing Billy Holly, everyone is going to know the exact same lyrics. 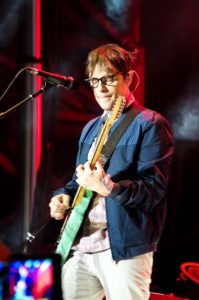 The hour before the show, you could no longer sit down with the amount of people starting to try to push towards the front. Our feet were tired, it had been a long hot day, and I suggested we play a game of Heads-Up that my friend had on her phone. Suddenly, after only one round, we had almost 20 people playing and contributing to our game. We didn’t know everyone’s names, but as long as they could quickly tell me what a spoon was without telling me the word, then that’s all we needed.

The concert ended up being amazing. I cried, my friend Amanda called her mom afterwards to gush about it, and we found ourselves an hour later sitting in Steak ‘n Shake laughing over shakes about the funny Heads Up memories. 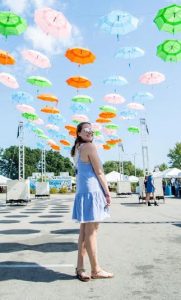 Reflecting on the experience these past two weeks has reminded me why music is so important in our lives. It brings people together and helps us to retain memories we will cherish for a long time. I still remember the song my mom used to sing to me when I was younger, and if someone starts singing the Phineas and Ferb theme song, I will automatically sing along in remembrance of early high school days. Do not expect me to not cry to the Harry Potter movie scores, and if asked I can recount the entire history of Fleetwood Mac’s rise to fame.

When it was announced we would be getting a new Christian Science Hymnal Supplement, I was extremely excited to start listening to some of the new hymns. The first time I saw one of the new ones was when I was at camp this summer during staff week, and as we all sat around the lodge flipping through the pages and singing some of the hymns, I knew that the summer was truly going to be a great one.

We sang a new hymn this past Sunday in church, and hearing so many voices so strongly sing (after learning it during the first verse) the new lyrics that we all identified with was pretty powerful.

If you’re ever in a bind to start a conversation or you want to get to know someone better, ask them about their favorite bands, favorite songs, favorite concerts they’ve been to. Either you bond over the same music or you learn about all new bands and songs. A person’s musical arsenal says a lot about who they are, and I know that I’m always touched when my friends feel comfortable enough to put their favorite playlist on while we’re driving in the car or hanging out. 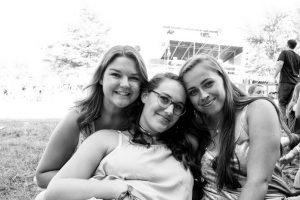 So here’s your daily reminder to listen to music more and take the time to enjoy it. I’ve been flipping through the new Hymnal Supplement and reading new hymns every morning to gain a thought for my day. Hymn lyrics can be so powerful, and I remember one summer on staff at camp the girls all got together and read a hymn every morning during our morning metaphysical meeting.

From one music lover to another, I wish you all the best in putting on your favorite song – throwback or new sensation – and just rocking out. I know I will be.