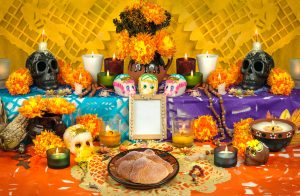 Before the Day of the Dead, people set a offering in a common place in their houses. It can be either inside or outside the house. This offering is set on a table, and it’s in honor of the people who died in the family. The offerings include food, drinks, fruit, candies, decorations, and pictures of the people who died. The offering has a trail that goes all the way out to the street or common road. This trail is made of a special flower called flor de cempasuchil (Spanish for marigold). The meaning of this trail of flowers is to lead the deceased to the place that used to be their home.

Some of the food in the offering are pan de muerto (Spanish for dead bread). This consists of a small sphere in the center of the upper part that represents a skull and four quills that represent bones. This form of the bread symbolizes the four directions of the Nahuolli or universe. Tamales are also very common in offerings, mole (Mexican sauce) is also very common. Atole (Mexican hot drink) is also present in the offerings. Candles are put on as well to light the table. An important decoration in the offering is the candy skull, which can be made of sugar or chocolate. Decorations and food depends on the state.

Children like to go and ask for candies on both days. Children dress up and go around towns asking for candies at houses and grocery stores. People give candy, money, and sometimes soda and fruit. People say that November 1st is for young kids to go out and ask for candy, while November 2nd is for older teenagers to go out. But kids like to go both days anyway. When the kids ask for candy they say “me da mi calaverita” and they sometimes sing a song or tell a short story related to the Day of the Dead. 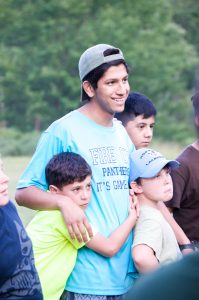 We also loveto tell scary stories about these dates, the most common stories are related to the early years of Mexico.

This blog post was written by Jesus De La Cruz Jandete. Jesus has been a counselor at CLC for the past couple summers and is originally from San Lucas Xolox, Tecámac, Estado de México. He is now a freshmen at Principia College.