August 7, 2017 Lindsay and I boarded a plane in Toronto, Canada and flew to London, England to begin the adventure of a lifetime with the Principia England Abroad program. The program’s theme was “What is an Artist?” focusing on understanding the text of Shakespeare’s plays and how to perform those plays.

The program included one and a half weeks sharing and bonding time for the group of sixteen students, two faculty members, and me (the Resident Councilor) in the incredibly beautiful mountains and lakes of the English Lake District in Northwestern England. Then we moved to London for a week of research in the British Library, and then two more weeks study of Shakespeare text and acting through the Globe Theater Education Department and attending plays at the Globe and other theaters. After that awesome experience we traveled to Esher, England where the students had four days of home stays with families from the Esher church.

Then came our final stay in Stratford-upon-Avon for two weeks study of Shakespeare plays and acting through the Shakespeare Birthplace Trust Education Program and the Royal Shakespeare Company. All together we saw nine plays – five of which were Shakespeare plays. And, in a number of cases, got to discuss the plays with the actors we saw the night before.

After all of this we returned to the U.S. and Principia College for the students to complete their course work begun in England and to rehearse and perform for the College and area Community Shakespeare’s “Merchant of Venice”.

It is impossible for me to describe in a short blog all of the extraordinary experiences we had in England and then back at Principia working on and producing the play. That being said, I will just list a few that stand out along with some representative pictures. 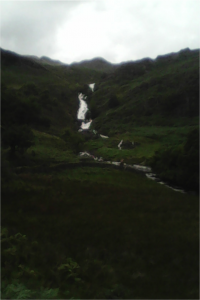 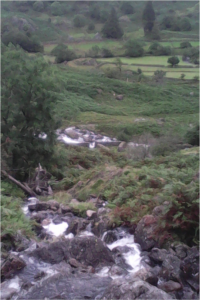 1.)  Hiking up a mountain beck (stream) to a clear mountain taren (small high mountain lake) in the fells (small mountains) of the Lake District outside the village of Grasmere. I inadvertently fell in the Beck and was rescued by Lizzy who happened to be our group’s practitioner and was hiking with us that day. Practitioners can be very handy practically as well as spiritually! 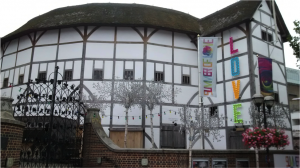 2.) Watching As You Like It and King Lear at the Globe Theater, which is a faithful reproduction of the Globe Theater Shakespeare performed his plays in from 1599 – 1610. We got to be “groundlings” meaning we stood in the open air and rain to watch the performances. The students and I got places right against the edge of the stage so you look up at the actors that are within your reach.

Then there was the day we got a tour of the Globe both back stage and on stage. The students were allowed to perform a piece from King Lear that they were rehearsing right there on that glorious stage. It was magical! 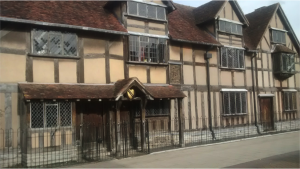 3.) In Statford, seeing Shakespeare’s Birthplace home and the school room where he learned to read and write and perform school plays, but most importantly his plays being performed live by professionals that understand and love his words. 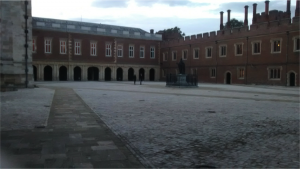 4.) Going to the private boy’s college (colleges are what the English call high schools) called Eton in Windsor, England, where stands one of Queen Elizabeth II’s castles, where we attended a lecture then discovering that the school court yard was the place where may of the scenes of the movie “Chariots of Fire” was filmed.

5.) Coming to Principia College to support and perform in 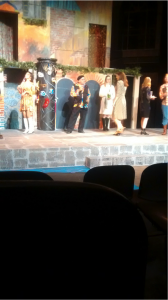 The Merchant of Venice. Our presentation of the play was designed to reveal the awful hurt and harm that racism, sexism, and anti-Semitism does to people and to start a discussion on how to end the hatred.

Like I said, I could go on but I hope you get a sense of what we experienced. An added bonus was the English people who were so very loving and kind to us. The entire abroad group learned a lot from their example on how to be generous and courteous. I learned to love English culture and I would love to go back to England for another extended stay.

– Mark Catlin and his wife Lindsay live in New York.

Have you gone on any fun adventures recently? Have you been part of a fun experience in school, sports, or extracurriculars? We’d love to hear about it! If you’d like to write a blog for us about any of your recent adventures, email zoe@crystallakecamps.org ! We can’t wait to hear from you!