Shortly before the start of the Christmas break, my friend Sam found some very cheap train tickets to the middle of the Scottish Highlands and, being keen hikers, this seemed like a great idea. Scottish winters may be relatively mild, but are notorious for their savagery, so we put our studying aside to research and buy second-hand gear. We also got another friend Matt on board, who lives in Scotland and knows those particular mountains well from summer expeditions.

Sam and I arrived on a Wednesday afternoon in the middle of January and met up with Matt, who drove us as close as we 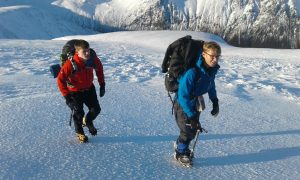 could get. We pitched our first camp in the dark after two hours’ brisk walk through a valley. Fortunately for us there had been a recent thaw, and we could pitch on grass rather than snow. We quickly discovered the downsides to some of our new gear. For example, Sam’s sauna-inducing down jacket was so puffy it couldn’t fit inside his pack, Matt’s sleeping pad slowly deflated through the night, and my sleeping bag turned out to be so wide that it filled with freezing air every time I moved.

We woke up early and made our own breakfasts; I had advised against sharing due to Sam’s tendency to burn porridge. By the time it was light we had been walking up the mountain for an hour and were well above the snow line. There was one exciting exposed ridge scramble for which we had to use our crampons (spikes for walking on snow and ice) and ice axes, involving Matt’s learning what to do with an ice axe, and much floundering about in snowdrifts. As we reached the top we emerged from the clouds into a perfectly clear, still day – practically unheard-of Scotland. 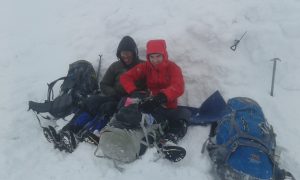 The walking was very slow due to the deep snow and many photographic opportunities. We had lunch on the summit of the UK’s 3rd-highest mountain, and throughout the day ate worrying amounts of snow – highly inadvisable but very refreshing. We continued to follow a dramatic valley edge round to our stop for the next night: a mountain hut, or bothy, in the valley far below. However, we were tempted by one last summit, from which we watched the last light disappear behind the horizon before sliding at least half of the remaining 1500-2000 foot descent on a slightly questionable snow field, with only the light from our head lamps.

Eleven hours after setting off we reached the bothy, but there was one final challenge: of physically getting inside. The snow around the entrance had been trampled into glassy ice. I succeeded on my third attempt, with some assistance from my axe.

The weather the next morning was decidedly grim; shortly after setting out it became light enough for us to see low clouds 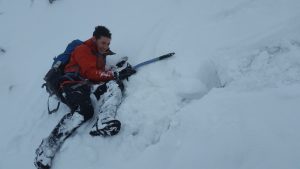 shrouding all but the lowest slopes. We also had a relentless slog from the valley floor to the summit of the UK’s second-highest mountain. The summit was only two miles away from the bothy as the crow flies, but reaching it took us nearly five hours.

The snow became softer and deeper as we climbed; periodically someone’s leg would disappear, or someone (usually me) would slide down an obscured slab of inclined rock, losing at least half a minute’s worth of exhausting uphill trudging. The wind picked up, visibility became worse and we became increasingly reliant on our compasses. The mountain has a very rounded top, so finding the summit was harder than you might expect. When we did find it, we dug ourselves a hollow in the deep snow on the sheltered side of the monument for a ‘chilled’ lunch.

Getting down was far less strenuous at first, with a tail wind approaching gale force pushing us onwards. But it was still slow going, as we had to stop every few minutes to check the map and compass. There were times when we wouldn’t have been able to see a cliff-edge fifteen feet away from us.

While traversing round a steep-sided peak we suddenly encountered a patch of very icy snow. Matt turned round and shouted over the wind, “Crampons?” 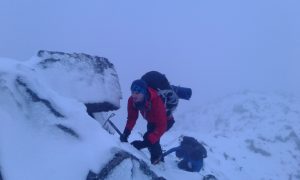 Crampons are fiddly to put on with thick gloves, and make progress much slower in softer and/or flatter ground. While considering this, I slipped over (again) and slid a few body-lengths down the side of the mountain before bringing myself to a stop with my axe. I promptly agreed with him.

Whilst putting them on, in a complete white-out, two skiers appeared out of the fog; the first people we had seen whilst in the mountains. They had been following our footprints to avoid having to navigate themselves.

As the sun was setting (not that we could see it) the descent suddenly became steep, rocky and icy, and the wind had reached the point where it would blow us over on all but the most careful and secure of foot placements, reducing us almost to all fours. Our communication was also limited to hand signals by this stage. I found a map half-buried in the snow, excitedly picked it up because I like maps, immediately fumbled it, and watched it blow away into the fog. About an hour later, having been keeping my other map (which I was only borrowing) in a not-very-secure pocket, I watched helpless as that too disappeared into the night. The hood on Sam’s down jacket, which was secured by poppers around the back of the neck, also ripped off, never to be seen again.

Soon after we were delighted to find some more steep snow fields deep enough to cover the rocks, which got us down to 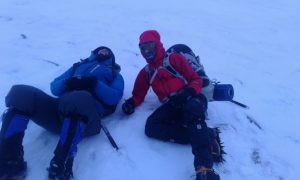 the valley floor in no time. After another eleven-hour day we pitched the tent in the dark (again) beneath the snow line for our third and final night, and crawled into our sleeping bags. It was my turn to cook dinner – I was last as mine was the lightest to carry, at the expense of taste. Sam took three mouthfuls before deciding he wasn’t hungry.

That night was particularly bad, plagued by the awful noise of flapping tent fabric. In the morning we found out why: Sam had forgotten to zip the outer tent door shut. Once packed up again, we only had an hour’s walk back to Matt’s car. The journey home was happily uneventful, besides a grumpy café owner, some very slippery stairs, and some very enthusiastic Scots singing on a train.