I started working at Crystal Lake Camps the summer of 2013. Whenever the councilors invited me, I would visit the Dunwoody boys to read a bed time story to them. My favorite was reading chapters from “Anne of Green Gables” by Lucy Maud Montgomery (or Maud as her friends called her). I found a yellowing copy of it on the bookshelf in the lodge living room. The boys really got into the story and often ask that I come back to read more about the adventures and misadventures of Anne whose byword was “well tomorrow is a new day with no mistakes in it.” I really think that many of the boys came to feel a “kindred sprit” with Anne. 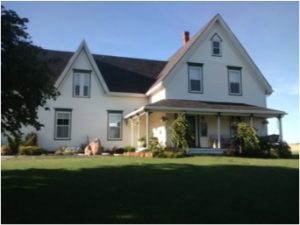 My love affair with “Anne of Green Gables” began in 2008. I saw a replay of the 1984 PBS mini series, found it so enthralling that I decided to get the book and read it for the first time. I took it to my father to read out loud to him. This was toward the end of his life when he was partially   incapacitated. The book provided a wonderful sharing time for us before his passing. From the very first page, we laughed, cried, and laughed some more together. The themes of caring, giving new life, and restoration of love that run throughout the story rang true with my Dad and me and really brought us close together at that time.

Of course, like any other fan of Anne I wanted to go see the place upon which the story was based -Maud’s home, Prince Edward Island (P.E.I.). In 2008 a number of couples from our friend group was ready to go but then the recession hit and money got tight so the journey to the Island that inspired “Anne of Green Gables” and seven sequels was delayed a decade. This year we made it. Lindsay and I and four other couples converged on a little place at the north central part of the Island called Park Corner. 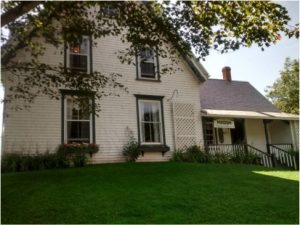 One of our friends made the arrangements to stay in a B&B at Park Corner. Little did she or any of us know that the farm house we were to live in for four days was Montgomery Manor, the home of Maud’s paternal grandfather, Senator Donald Montgomery. Our host was Paul Montgomery a cousin of Maud’s. “Anne” had a vivid imagination and mine took off as I went from kitchen, to dinning room, to parlor, to the upstairs bed rooms. This was the home Maud would frequently visit when she was able to get away from her austere maternal grandparents who were raising her on their farm in Cavendish, a town about twenty miles to the east. I imagined Maud as a little girl or teenager playing around the house or visiting with her famous grandfather in the parlor. This imagining was encouraged by the period furnishings and the generous sprinkling of many of Maud’s novels and books of poetry on tables throughout the house. Lindsay and I even stayed in the room family tradition holds was the one in which Maud stayed. 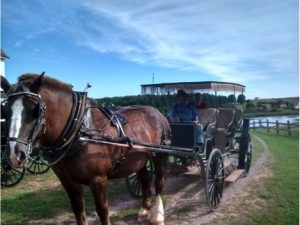 At the Campbell farm I took a wagon ride with “Mathew Cuthbert”. Molly the Belgium draft horse is in the foreground. The Lake of Shining Waters” is in the background.

Two hundred yards down the road west of our lodging was another farmstead which is now a museum. This is the Campbell farm and home of some more of Maud’s cousins. The place is still owned by the Campbell family. Maud would often stay at this farm and play with her cousins on visits to Park Corner. Maud says in her journals that some of her most happy rollicking times was with her cousins at the Campbell farm. She was married in the parlor of this home in 1911. You have to cross over the end of a lake when walking from Montgomery Manor to the Campbell farm. At the crossing, there is a sign that says “Lake of Shining Waters” – a reference to the lake in “Anne of Green Gables”. Being near the Campbell home was again serendipity. We did not know about it being near our lodging till just before we left for P.E.I. 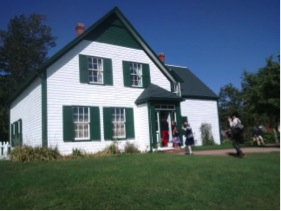 As I mentioned, Maud lived with her maternal grandparents (the Macneills) in Cavendish. Another farmhouse where some more cousins lived is also in Cavendish near the grandparents’ home. Maud has written that she modeled Green Gables after this house. This is where all the tourist go. The Anne of Green Gables house is a national historic monument owned and operated by Parks Canada (Canadian National Park System). Not far away (on the other side of the “haunted woods” – see “Anne of Green Gables”) is the home and property of Maud’s grandparents which is still owned by the Macneill family. You can walk to the site of the house in which Maud was raised and in which she wrote “Anne of Green Gables”, “Anne of Avonlea”, and a number of poems. The house is gone but the cellar, well, and quite grounds still exist to walk around in and imagine. The man who took my ticket money and told some stories about the place and Maud was David Macneill her first cousin twice remove

Cavendish was a necessary pilgrimage but Park Corner was the place that Maud was the happiest. We found it quite, away from most of the tourists, and beautiful. I could feel the happy times she had there. It was the best place for my imaginings. I truly believe we were guided there. I could feel our acceptance as “kindred sprits”.

Mark Catlin lives in Rochester, NY with his wife Lindsay. He has worked at Crystal Lake Camps as the Boys’ Head Counselor and the CIT Director. He is quite the Nature Expert and has given many nature hikes that have inspired great interest among campers to “stop and smell the flowers” both at camp, and in their daily life!