In mid-November, Becca and I headed down to JFK Airport in New York to begin a 16-day trip to share about the activities and opportunities at Crystal Lake Camps with Christian Science church members and attendees in several cities in South America. We had a wonderful time meeting lots of new people, sharing about the impact and mission that a CLC camp experience offers young people, and getting to see some amazing sights and eat a lot of delicious food!

We started off in Buenos Aires, Argentina – a big, and rather European-feeling city.

We attended both the Wednesday night and Thursday Thanksgiving service at First Church, Buenos Aires, and talked some with several of their members. This was a bit more of an informal meeting, but after the Wednesday service, we stood around and spoke with some 5 members about CLC and our international component to camp.  Out of that, the church’s clerk shared our Spanish- language brochure with over 200 contacts he has on an email list to share information with Christian Scientists all over South America. 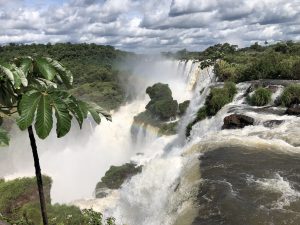 We then had a few days of sightseeing and vacation time – including go to Iguazú Falls on the Argentine border with Brazil inthe far north of Argentina.  Iguazú Falls are amazing! It’s the largest waterfall complex in the entire world, and if you ever have an opportunity to go – you totally should!!

Then we flew the short hop across the bay separating Argentina and Uruguay to spend 4 days in Montevideo. It’s a beautiful city spread out along the Atlantic Ocean coast – with the longest uninterrupted sidewalk in the world at more than 13.5 miles, called the “Rambla”, that is along the entire oceanfront of the city.  Really it’s more than 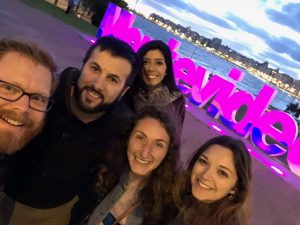 a sidewalk, in the portions we saw it was 10 or more feet wide, so that people can walk, run, bike plus sit and enjoy the ocean views. We spent a LOT of time on the Rambla with friends and church members talking!

On Sunday, Becca & I split up so we were able to attend both 2nd and 4th Church in Montevideo for Sunday service. I did a mini camp show after church and Sunday School were over with a large group of teenagers at 2nd Church, and Becca had a Q&A session with the members at 4th Church after the service. On Sunday afternoon we did a camp show at 4th Church, getting to meet a few of the members from there.  Did you know that Uruguay has a pretty large and active Christian Science population? There are seven branch churches spread around that city of 2 million people! Anyhow, we are excited as we are certainly expecting to get several staff members and/or campers from Montevideo for next summer!

Next, we flew up to Rio de Janeiro, which is a beautiful (and HOT!) city. It’s built on a large bay, and there are enormous mountains that jut straight up out of the ocean to some astounding heights. You may have seen photos of Pão de Açúcar ( 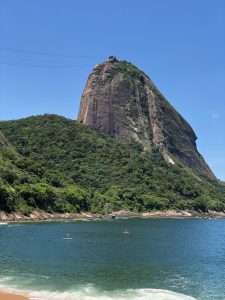 Sugar Loaf mountain), or the large Christ the Redeemer statue that stands atop one of the other mountains overseeing the whole city. But also, miles and miles of beautiful beaches! 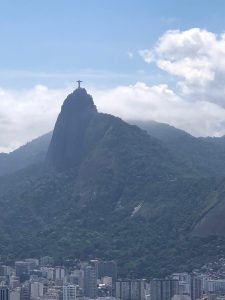 We had Wednesday night service at First Church, Rio, and met with a good sized crowd of Church attendees before the church service.  And after church, as it’s located near the Maracanã Stadium – one of the major fúbol (soccer) stadiums in Brazil, there had been a game going on so we got to wander through the crowd and see all the enthusiastic fans, tailgating and barbecuing up some delicious-smelling food!  We also tasted Açai – which though Becca and I had eaten before, there they prepare it in a very different way and it was really tasty! It was more like the base in a smoothie or shake – and crazy to look at as it’s so dark purple! On that Thursday, we went out to the far western edge of the city, saw some of the incredibly beautiful beaches, and had a meeting with a number of church members in a CS Society [informal group?], including several teenagers who joined us by Skype as they couldn’t make the trip to church due to school obligations.

Then for our last stop, off we went to São Paulo, the largest city in South America at over 25 million residents! It’s a big 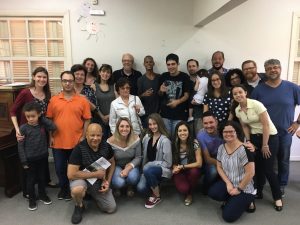 and fun city, lots to see and do. We had a really full camp show after church at First Church, São Paulo, and lots of interested families!  We also went out to lunch with a big crowd from church – for a 3 hour lunch! They really know how to enjoy meals there, for certain! 🙂

So after a wonderful and on-the-go couple of weeks, it was time for the trip home. But the friends we made, and those we’re excited to see at camp next summer, we are SO grateful for everyone’s time and love expressed towards us. It was a blessing and fun time, and we’re looking forward to sharing more about the various cultures we experience in South America next summer with all the campers and staff!