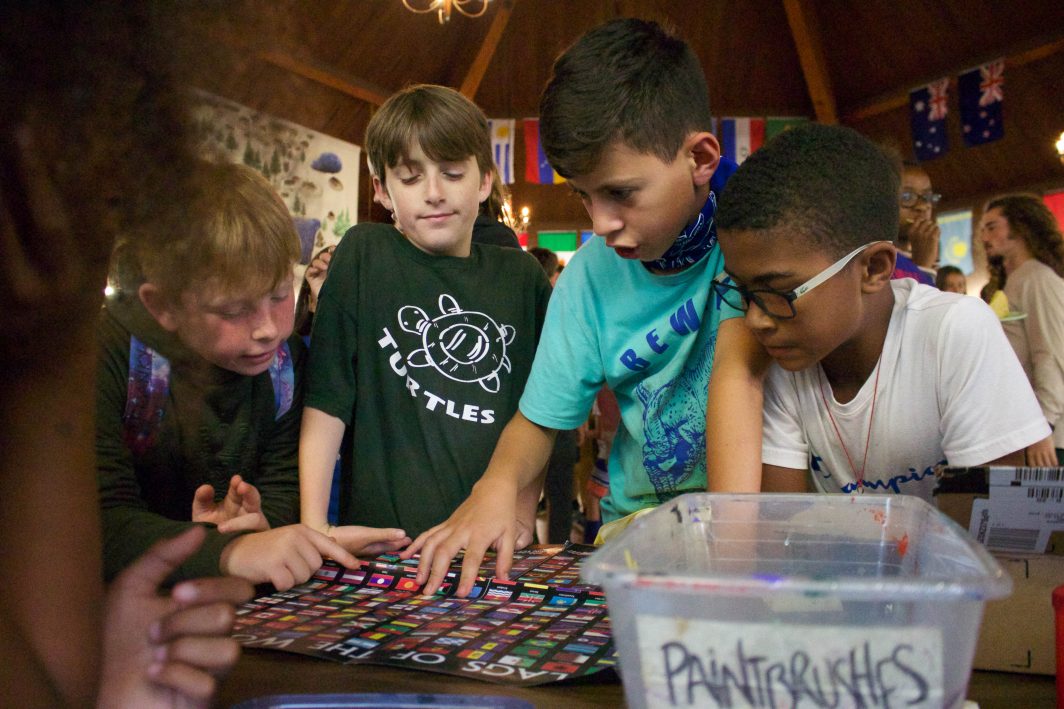 Yesterday was another full day of love and appreciation of beautiful weather and action-packed classes! After a day of rain, a cooler, sunnier day was upon us and we utilized the beautiful, breezy weather to its fullest capacity!

Our Metaphysical Activity Period (MAP) started us off on the right foot with Counsellor Sofia reminding us that sometimes we just need to take out the trash when it comes to aggressive mental suggestion and bad thoughts.

Each camper and staff member was given a sticky note to write down some of their negative qualities that they knew belonged only in the trash. These were things such as being tired, feeling frustrated, not getting along with others, or not feeing fully competent in all areas of our lives.

Obviously garbage thoughts to have.

We then were given the opportunity to literally throw these thoughts away, as each cabin took a small trash bin and threw away their negative thoughts, never to be seen again. The trash bins were then swapped around to other cabins so each cabin had a completely different bin of negative thoughts. We were then tasked with going through these aggressive mental suggestions and combatting them with quotes and thoughts from the Bible and Mrs. Eddy’s writings.

Each suggested negative thought was addressed, and each cabin created a small mural of all the good thoughts they had compiled. This activity helped campers to see that they aren’t always the only person dealing with specific issues. This MAP coincided with the previous MAP, which reminded campers of the support system they have in other campers, staff members, practitioners, nurses, and all Christian Scientists.

Essentially, we never have to go through anything alone.

I overheard a younger camper after pulling a sticky note from the trash bin say, “Oh. I could have written this. I deal with this too!” She then was quick to flip open the Science & Health and start looking for a way to fix the animal magnetism. She went on to remark that she could easily heal this condition for herself, especially since, “Sometimes it’s just easier to pray for someone else, I guess.”

I think this MAP was a really important activity to provide for the campers, especially with it still being the beginning of the session. Sometimes campers come from Sunday School classes that are just one to two people, and sometimes they come from large classes too. But regardless, when we are going through sometimes, it oftentimes feels like we are the only one singular human being in existence going through this issue and therefore, we have to go through it alone.

But that is not the case. And this MAP showed the campers that everyone is on the same path towards understanding God and forming a closer relationship with Him. One thing my Sunday School teacher used to tell me from a young age is that God’s path is wide and full of endless possibilities. Though we are all on the same path, we don’t always take the same steps. It’s like when we walk on the beach with our parents when we’re young – our feet are way smaller than those we are walking with, and we can see the footsteps that are made in the sand. We’re all going the same direction, but not all taking the exact same steps.

But sometimes when we are walking with our parents, following behind them and jumping from their one footstep to the other, we are taking the exact same path and we know it’s going to be a safe one because our parents have showed us the way. God is, our Father-Mother, does provide this path for us. We’re all on the same path, and we can lead one another through it as long as we are listening and supportive of one another.

This MAP was also a great opportunity to show campers that no matter what the issue may be, we can always turn to our pastors – the Bible and Science & Health – to find an answer to anything. And I mean anything.

It was a great start to the day, and it only got better from there! The classes were packed with new adventures and skills. Campers took to the rock climbing wall and were able to complete it blindfolded with the aid of their fellow campers, and cooking class even got to make some really, really yummy cinnamon rolls.

All in all, lots of fun was had.

The evening program was International Night! We had tacos for dinner and then scones for dessert, and once the meal was over, Alford Hall was converted into a place of festivities for face painting, flag drawing, and multiple language stations for campers to learn common phrases and sayings from the countries represented this session.

There was also an impromptu dance party that happened almost immediately once everyone gathered in Alford Hall. We were playing music from all the countries that are represented this session, and after a couple songs from Russia, Mexico and Argentina, Hey Jude by The Beatles came on and everyone clumped together, swaying together and singing their hearts out until literally the entire camp was swaying and dancing together, singing way louder than the speakers would ever be able to.

It was a night of harmony and sharing of cultures and traditions from all over the world. We learned a dance from Mexico, I learned how to say, “Where is the bathroom?” in four languages, and campers started to memorize what all the different flags are that are hanging in the dining hall, representing all the countries that campers and staff have come from in the past.

It can’t get much better than this, honestly.

It’s another sunny day, but not too hot that we all feel like we need to spend 100% of our time in the lake. We’re just completing MAP and about to start our second period classes. It’s a Wednesday, so tonight will be Testimony Meeting in Alford Hall – our joint Testimony Meeting of the session. Campers are encouraged to share gratitude, testaments of healing, and are also encouraged to present their testimony in whatever language they so choose – English, Spanish, Russian, you name it.

All the photos from yesterday’s festivities, classes, and MAP are uploaded to our SmugMug, and you can catch some videos of the infamous Hey Jude sing-and-dance-along on our Instagram Story! Thanks for staying updated with us and we’re looking forward to sharing our full day of smiles and gratitude with you!