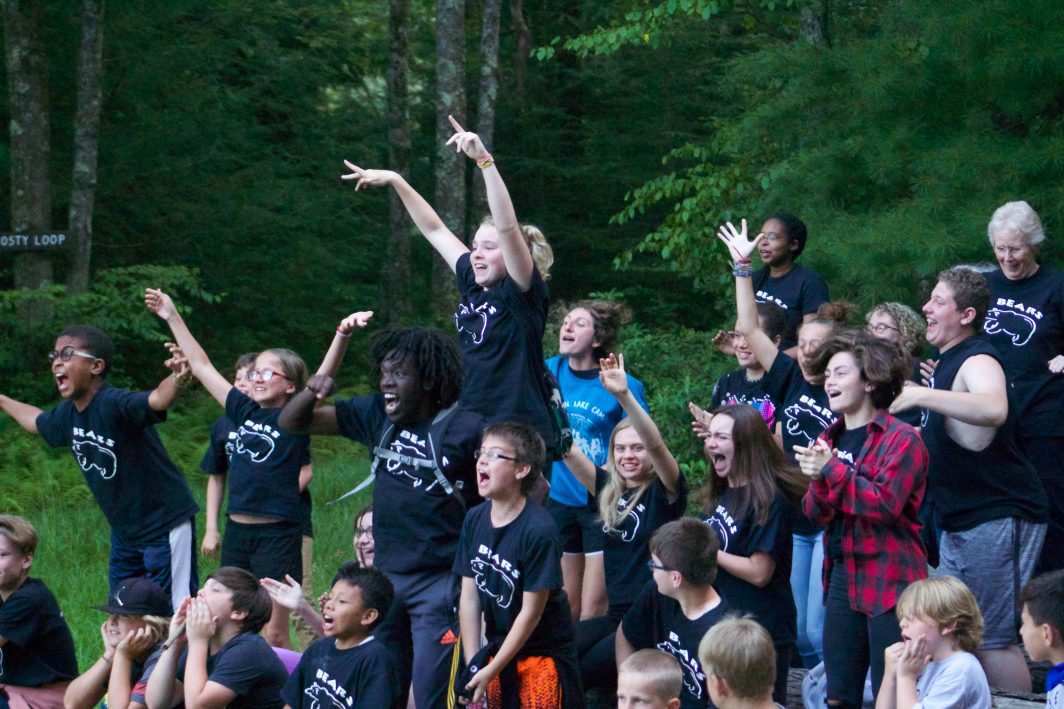 I know I often say that we had a long, full day here at Crystal Lake, but I truly mean it when I say that yesterday, Little Olympics, was a full, full day of fun, creativity, team building, cheering, and sportsmanship.

For those of you who aren’t familiar with Little Olympics, it’s a full activity day here at camp that involves all of the clans competing against one another in multiple different competitions to win points for their clan that accumulate throughout the summer and all come together at the end of this session to win a clan the ultimate title of winner at the end of the summer.

The morning is spent on the Game Field, while the afternoon is spent on the Waterfront. I’ll run you all through the whole day so you can know each and every activity that we competed in, and the exciting moments we all shared throughout the day!

We were woken up to music instead of the usual bell. Liam, our Program Director, and the Little Olympics committee drove through Girls’ Camp and then Boys’ Camp blasting music to get everyone pumped for the day ahead of them. Each cabin came out to listen to the music and share an early morning dance party that hyped everyone up to get their clan shirt on and start the day!

Once breakfast was over, everyone took to the Game Field to start painting their clan flag and get creative with some face paint. We had warrior stripes across faces, little turtles, turkeys, wolves, and bears decorated on cheeks and arms, and the occasional loud print of “BEARS! TURTLES! WOLVES! TURKEYS!” written across arms and legs.

Each clan also put together a cheer that they all sang or yelled in unison to kick off their day, and once they finished with the cheers, the opening ceremony of lighting the torches and setting off fireworks kickstarted the first rounds of competitions.

The first wave of activities included volleyball, an obstacle course, and donut eating. I know everyone is starting to think, “Oh man, I’d love to just sit and eat a donut to win for my clan!” But there’s a catch! The donut is actually dangling on a string above your head, and you can’t use your hands as you attempt to eat the whole donut and chew it all down first. It’s hilarious, and even if you don’t win, you still get the reward of getting to eat a donut. So really, it’s a win-win situation.

Volleyball was rather rowdy, and we had some serious competition this year as majority of campers are taking the volleyball class that has been offered this session, so majority of campers have acquired some skills that they were able to use to win points and ace their serves.

As for the obstacle course, it was quite intense as campers had to lift little weights, hoola hoop for a solid ten seconds, shoot a basket, and jump from one hoola hoop to the other before finishing with a somersault. Not only was it competitive, but it was also so funny to see campers be-bopping around from one obstacle to the other that even the campers were laughing as they were attempting to complete the course.

The second wave of activities for the morning were soccer, cracker-eating, a 50-meter dash, and gaga. Cracker eating was the funniest thing I’ve seen in a while. There was actually a typo on the sheet, and instead of the usual cracker-whistling, “cracker-eating” was typed, and the confusion turned into probably one of the funniest competitions that I seriously hope sticks around for the rest of camp time forever.

Instead of trying to whistle through crackers, campers just started to see how many crackers could be shoved in their mouth at once, and the ultimate number from an Unnamed Nikahu Girl was 32 crackers were able to fit in her mouth before she ultimately had to give up and drink as much water as she possibly could. Her cheeks looked like a chipmunk, and the funniest part was that she was just as surprised by the amount of crackers she could fit as everyone else. She had to keep from laughing for cracker dust would just spew from her mouth, and a large crowd ended up finding entertainment in the event.

The 50-meter dash was over before it even began, because some of these campers can run so fast! They tore down the camp road, and my goodness, it was impressive. No wonder we consider these the Olympics, because the athleticism of our runners was impressive.

Just as impressive as the gaga skills our campers have built up over the years of playing the sport for hours and hours. The gaga competition lasted the longest, and the tactics some of our junior campers were able to implement on one another was immensely insane. There were legit strategies and alliances and at one point one camper was able to go up against three other campers and win.

Soccer was soccer. You kick a ball and it goes in the goal. Pretty self explanatory, if you ask me.

The afternoon events ended with Feed the Porcupine, a classic CLC game. Campers from each clan stand in the middle of the Game Field where the “porcupine” (the staff member running the event) yells for what they are hungry for, and then one camper from each clan runs for that item to try and bring it back first. Five junior campers and five senior campers competed to feed the hungry porcupine and the porcupine was hungry for some interesting things. Campers had to find ten blueberries, a shoelace, a black sock, something yellow, a cup of water from the lake, a chair, a book by Mrs. Eddy, a hymnal, a pine cone, and an orange flower (which are outside Alford Hall).

Once we had finished lunch and completed our extended rest hour (thank goodness), the events on the Waterfront began! The first round of events included a relay race in the deep end, the t-shirt challenge in the shallow end, and paddle board relay. Second round wacky relay in the deep end, dragon tails, and the sponge bucket relay. Then for the third round there was the high jump off the T-dock, the tea cup relay in the shallow end, and the infamous watermelon eating contest.

The watermelon eating contest was as wild as usual, and there was a Dunwoody boy who literally ate his watermelon in what seemed like two large bites. He absolutely destroyed it. Dragon tails is always hilarious, because campers will float in the inner tubes with a flag football flag tied to the back and try not to have their tail taken.

The afternoon ended with the canoe sink challenge, where the entire clan comes together to try and sink a canoe in the shallow end first before anyone else. The entire clan competes, and everyone gets soaked, but everyone’s laughing the entire time so you know it’s a good time.

By the time evening rolled around, Little Olympics may have finished, but it was time for Council Fire, so the clans weren’t quite done competing just yet. It was a full Council Fire too with more games played than any other Council Fire yet this session. We didn’t play Till-Ee-Come, which I’m still trying to get over because it really is the greatest game of all time, but we did get to play Deer Wrestling, Fox Tails (a game similar to Dragon Tails), Leg Wrestling, sing a couple songs, and enjoy the fire dancers.

This morning the Session 3 1a campers are going home, unfortunately, but what a day to end their time here! We won’t know who wins the clan competition until the end of this session, and we still have one more Council Fire to compete in, but one thing is for sure – every clan did their absolute best yesterday and everyone had a great time.

We’re starting our day of classes now, and enjoying another beautiful day of sunshine with a slight breeze. Tonight is Vespers! And it’s being run by our CITs so we’re all proud of them and all the hard work they’re doing! All the photos from yesterday, as well as quite a few videos and cheers have been posted to the SmugMug, Instagram, Instagram story, Facebook and the Facebook story! Thanks for checking in with us and we look forward to sharing our day today with you soon!