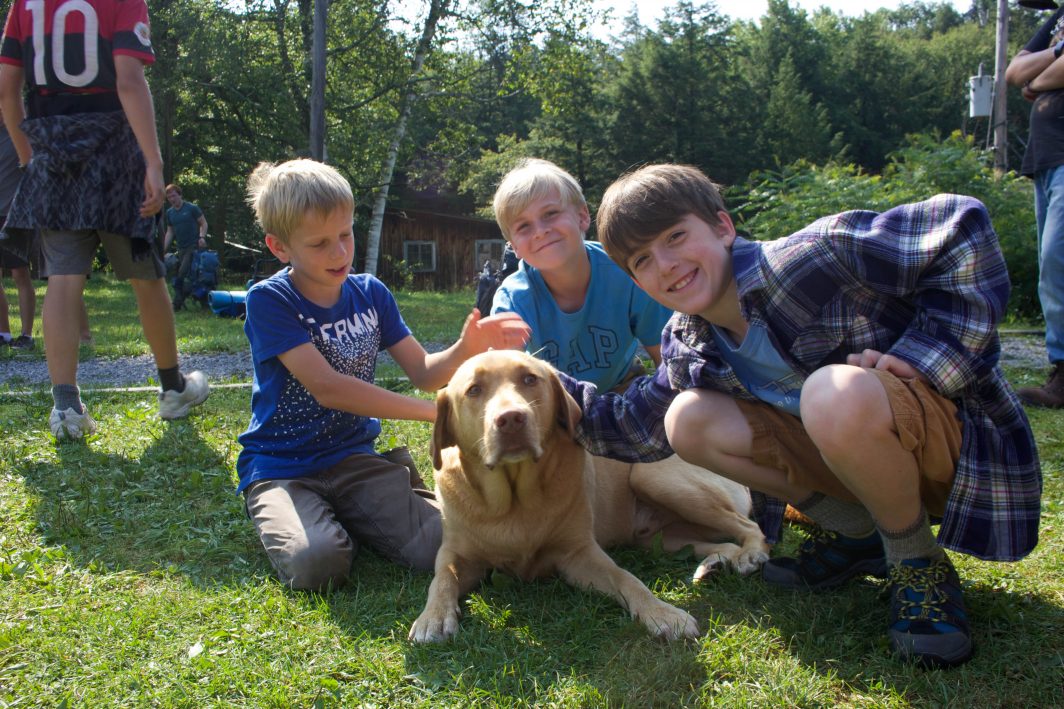 The return of campers from Overnights was all high spirits and laughter even though it was pouring down rain when they all returned. And I mean it when I say that it was a pretty blustery day – a real storm was happening – but campers were smiling and laughing, cheering as they got back to camp no matter how dry or wet they were.

Overnights were really successful this session, with high reviews of the hikes and adventures upon the campers’ return. The Kiyans were able to go on a beautiful waterfall hike, and the Dunwoodians were able to explore Project Cabin and Whipple Mill on property. The rest of the cabins found their way along different parts of the Loyalsock Trail, and I heard from a camper that Overnights definitely ended up being the highlight of her session.

We had Testimony Meeting the night campers returned that Tuesday, because the weather would permit us to spend a rainy evening in, instead of a rainy Council Fire tonight. It was separate Testimony Meetings, so I only have intel from the Girls’ Camp testimonies, but the evening was filled with testimony after testimony of girls who enjoyed Overnights not only because they were able to get out on the trails and see more of the surrounding area and beautiful mountains, but because the healings they had while walking along those trails with great friends was more than they could have ever asked for.

Overnights can be challenging. Not every camper who comes to camp is accustomed or prepared for spending a couple days out in the wilderness. Gosh, when I was a camper we only went out on Overnights for one night and came back the next day. Now campers are spending a full three days and two nights out in the wilderness and honestly, it’s one of the greatest experience camp has to offer.

The gratitude that came from the testimonies after Overnights were all heartwarming and expressed multiple stories of sometimes not knowing healings had happened until they were walking along the trail or setting up camp and everyone was just as perfect as it was supposed to be.

The love and appreciation for being out in the woods didn’t stop when the campers came back from Overnights. Instead, it was amplified with this morning’s Metaphysical Activity Period (MAP), which was led by the CITs! It focused on the story of Creation, and what it means to be spiritually created as God’s image and likeness. Everything God made, he knew to be good. What a comforting thought – to know that in God’s eyes we were immediately good because He made us to reflect everything good, and wonderful and beautiful.

The campers were separated by cabin and set out on a scavenger hunt throughout camp. Campers were at the teepees, the soccer field, the fire pit near the lake, on the camp road, and at the flag pole. Each location offered a new adventures – making a fire and talking about God’s light he provides, recreating a Bible story through a skit, creating new calisthenics that show how we reflect God, putting together a puzzle with a quote by Mrs. Eddy – the list goes on and on.

It was all smiles and laughter, and campers could be heard all around the lake as their voices carried from one scavenging point to another. Thank you CITs for reminding us we are spiritually created and therefore can only live spiritually!

It was our last full day of classes, because somehow tomorrow is our Banquet! When did that happen? I am genuinely confused as to how the session is ending already, because I know I’m not the only person who feels campers literally just arrived yesterday.

Our banquet theme this session is Monsters Inc., and the props and decorations the banquet committee and our Arts & Crafts Director Margie have been working on are seriously amazing! I’m already seeing quite a few doors from the infamous scene in the movie when Mike and Scully (the two main monsters) enter through the portal that shows all the doors Monsters Incorporated owns. We’ve got some cut outs of beautifully painted monsters that we’ve come to love and adore since the film first came out, and I heard some exciting rumors we might lift some monster themed lanterns at some point.

As for our last full day of classes, we had beautiful weather that was cool enough to feel comfortable outside, but still nice and warm so we all wanted to jump in the lake. Water polo played one final game to show off their new skills they’ve learned this session, and the same goes for volleyball, tennis, and frisbee.

We now have a Council Fire once a session, and then this session, Third Session, we have two – one each week. The Silent Council Fire tradition lives on where once we’ve completed the Council Fire in the evening, everyone is quiet and reflects for the rest of the evening in complete silence. No one speaks until the staff are up the next morning at 6:15am for their morning metaphysical meetings, and the campers wake up at 7am to start their day.

We are eternally grateful for all the campers and staff that have been here through the summer and all the campers and staff that are here right now to contribute to our Silent Council Fire tonight! It’ll be a great night to reflect on all the good that has happened in the past weeks and sessions, and give us some time to give gratitude for everything camp has provided for us to start this next school year off spiritually minded!