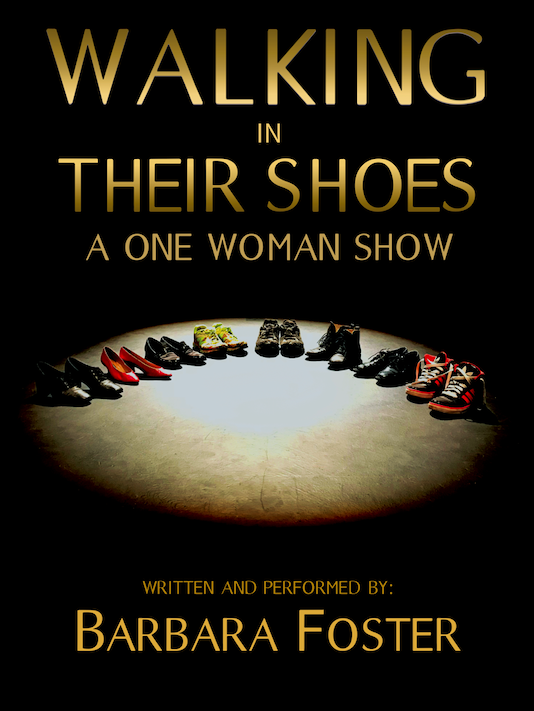 On May 3 2018, a year ago, I performed a one-woman show called Walking In Their Shoes at Principia College. Leading up to this day I worked from January through April at Principia to create the show.

When I was younger and as I journeyed through my college career I felt like I needed a creative project. Yes, I had homework and I participated in the performances in the theatre department, but I wasn’t satisfied. I felt like the skills that I was taught at Principia were not being used very well and I felt a great deal of lack. I studied Creative Writing and Theatre at Principia College and I wanted to merge the two in someway to explore myself and to understand the creative process.

I was lucky enough to create an independent class with my theatre professor Chrissy. So after taking an extra semester to study abroad in England I took another extra semester to complete the English minor and get some deeper theatre training through this project. I had no intention of this show being a one person show, which now that I think about it is funny because I wanted to do this project, I wanted to get better in my writing and acting. So it only made sense to have this project be a completely independent project, but that realization only became apparent once I had finished putting together the show. Over the holiday break before the new semester started I was so excited about this project that I decided to get a jump on it. I wrote two pieces and started to do lots of brainstorming. 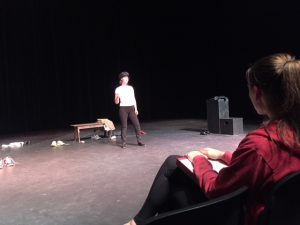 Before I went on holiday break Chrissy and I had a meeting to set up this course. When I left her office she said, “It would be interesting if you did a character of who you used to be.” That was an interesting thought. As I thought about that one night I just wrote a monologue to see what that “who I used to be” character would look like. Then in the lesson that week there was a passage from Science and Health on page 252 that, to me, gave a theatrical look on Material Sense and Spirit. This was inspiring to me and I thought about a scene where two people could play these characters and I could play the “who I used to be” character.

Well the new semester, and my last semester, had started. I had my first official meeting with Chrissy. I shared the things I had written and the ideas I had about this project. I told her that the scene I wrote could have other people in it. As she looked it over and over again she turned to me and said, “I think it would be powerful to just have you on stage and then Material Sense and Spirit could be voice overs.”  That shook me up for a while. No way, I thought, could I be interesting, or powerful, or good enough to be on stage by myself. Well I fought those thoughts throughout the semester. I learned a great deal through this project. I did learn about myself (WAY more then I was expecting). I learned about my creative process, how to take time for myself, and above all that Christian Science is a process, just like the creative process. There is no one size fits all, or a right way to have a creative practice or to be a Christian Scientist. That blew my world wide open. 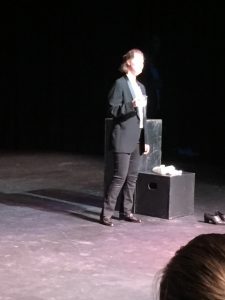 So fast-forward to the end of the semester and the day of my first ever written show performance. Even though I knew I was in a very forgiving place and that the audience would consist mostly of friends that didn’t stop the nerves from coursing through me, but I set the stage, did some quick light and sound work, ran through lines and tried to breathe. I did the show and learned a whole lot just from doing that and the audience reaction. There was a line out the door of audience members. Both my theatre professors said they were proud, my Mother was beaming and my brother gave me a big hug. I learned that I am interesting, powerful, and have everything I need to be alone on stage, even though I might think I made a mistake; the audience got what they needed. That was a good experience and it helped me grow so much.

Now, fast forward several months later. I’ve now been graduated from college for a few months and scrabbling to figure out what I should be doing with my life. My professor Chrissy sends me a message telling me that I should apply for the Orlando Theatre Fringe Festival and perform my one-person show there. Well, I was not feeling like performing, especially for a public audience, but I applied thinking nothing of it. By a random lottery system I got selected to perform in the Festival and now I’m working to revamp the show. I’m still working through some of the same thoughts and nerves, but I’m grateful for this opportunity to express Divine Inspiration (a name I started to call God while working on this show) and to learn that my strength, creativity, and work are worth being shared.

–This blog was written by Barbara Foster, Alumna