The property of Crystal Lake Camps was owned by Mrs. Bessie Laughlin, widow of J. Page Laughlin of Jones and Laughlin Steel Corporation. Mrs. Laughlin was a member of First Church of Christ, Scientist, Washington, DC and lived in Leesburg, Virginia. The Laughlins used the property as a summer home. During the 21 years they owned the property, they made many useful improvements by building Tawanka, White Pine, and Kiya. Laughlin Lodge, formerly known as Bena Lodge, had been built around 1900 as a hunting lodge.

In 1948, Mrs. Laughlin decided to sell her Pennsylvania summer home. With two lakes, surrounding forests and several cabins, she felt it would make an ideal camp. That summer she placed an ad in The Christian Science Monitor, offering the “famous Crystal Lake property —suitable for a summer camp.” This is how Charles Alford found this unique property. When he told Mrs. Laughlin about his idea for a camp for Christian Scientists, she was very pleased and sold the property to the Alfords in November 1948 at favorable terms and with her blessing for the new venture.

In 1949, Crystal Lake Camps was founded by Mr. and Mrs. Charles C. Alford of Washington, DC. The founders, Uncle Charlie and Aunt Kay, as they were affectionately known, brought to their work a love of young people. During the 1920’s, they had directed camps in Connecticut, New Hampshire, and on Cape Cod. One of these camps, Camp Chocorua, was exclusively for Christian Scientists. The Alfords sent their own two children, Joe and Mary, to summer camps beginning at age eight, and early gave them increasing responsibility at Crystal Lake Camps. 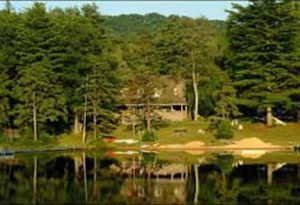 Crystal Lake Camps opened with about fifty campers, using existing buildings for sleeping quarters and a dining hall. From the beginning, the idea of having two camps — one for girls, the other for boys — seemed natural. For one thing, there were two lakes, Crystal and Wild Rice, and two groupings of buildings on each. This suggested a camp program in which boys and girls would be free to pursue their individual interests at certain times and unite in activities of mutual interest at other times.

After seeing Crystal Lake Camps grow for 12 summers, the senior Alfords turned over ownership and operation of the camps to their son Joe and his wife Dottie in 1961. With the loving support of a consecrated staff, the camp continued to grow.

A non-profit corporation known as Crystal Lake Camps was set up to operate the camps in 1984. Joe and Dottie Alford leased the camp property to the corporation, served on the Board of Trustees of the corporation, and served as Camp Directors until 1997.

Crystal Lake Camps is now a co-ed camp, all programs and activities being open to all ages and genders.